Scott Walker not really into Wisconsin!

If you are one of those anti-government types, then what Scott Walker is doing makes perfect sense to you; its just politics, where the ends justify the means, people get hurt but that's life.

But when policy ignores growing state problems, we've got a problem. Here's a quick rundown of ignored problems any responsible governor would be on the front lines facing, and proactively solving...except Walker. Could he even acknowledgment or show just a little concern?

JS: Dairy farming has been Kyle Kurt's livelihood, and his passion, since he graduated from Lodi High School 18 years ago. But come Monday, he's having an auction to sell his cows, his milking equipment, his tractors and other farm machinery that he's spent years acquiring. “It’s probably the toughest decision I have ever had to make,” Kurt said. "Something's got to change or the small farms are going to be gone."

Scores of Wisconsin farmers are in a similar predicament. And with them, a way of life that has defined much of the state for more than a century and a half is disintegrating.

Entire communities are falling apart as small farms go under, said John Peck, executive director of Family Farm Defenders, a Madison based advocacy group. Grain mills, car dealerships and hardware stores suffer. The local tax base erodes. Churches and schools struggle or close. “The multiplier effect on the rural economy is huge. It’s why you are seeing all these boarded-up small towns,” Peck said.

Wisconsin lost 500 dairy farms in 2017, and about 150 have quit milking cows so far this year, putting the total number of milk-cow herds at around 7,600 — down 20% from five years ago. Federal court data shows the Western District of Wisconsin had the highest number of Chapter 12 farm bankruptcies in the nation in 2017. Some farmers cover up taking their own life by making it look like a farm accident, said Joel Greeno, president of Family Farm Defenders and a farmer near Kendall in southwest Wisconsin.

Rural Broadband? Walker in No Rush: Remember this...

The state is turning down $23 million because state taxpayers would have been on the hook for the entire amount if the state could not meet the grant's precise requirements, Mike Huebsch, secretary of the state Department of Administration, said.

Blind to Business Opportunities, Walker spends dwindling state taxpayer money: There's no rush, nothing wrong with almost being last in the nation:

Wisconsin ranks 49th among states and the District of Columbia in the average download internet speed for a wired connection, according to the report from Speedtest, a Seattle technology firm.

WHA: Ask Dan Corbin how badly northern Wisconsin needs broadband internet, and he’ll tell you some residents in his town are still using dial-up. The chairman for the Town of Summit said residents have yet to see the expansion of broadband service to rural areas of Douglas County and the City of Superior ... Superior residents are paying the same monthly rate as residents of La Crosse for slower internet service. Northern Wisconsin officials also expressed concern over discrepancies between the speeds that providers advertise are available and what service is reflected on the FCC’s broadband map.

In rural areas, it’s about $8,000 per subscriber, said Jeff Lee, operations director at Norvado in Cable, Wis., which has been working with fiber optic cable installations since 1983 ... With fiber optic cable and copper hardline so expensive to install across long distances, wireless options are being considered … fixed wireless also rely on sending data over short distances, and can't handle "high data" activities, like video streaming, very well.

The Wall Street Journal reports, approximately 39 percent of the rural population in the country, about 23 million people, don't have "fast" internet, which is defined as having the speed to support "email, web surfing, video streaming, and graphics for more than one device at once," the Journal writes. On the other hand, only 4 percent of urban dwellers lack fast internet. Former FCC Chairman Tom Wheeler concluded that Americans should have access to both fast home Internet and mobile broadband.

Walker's Coal Dust Kids: Imagine a thin film of coal dust on everything around you. How safe, how healthy, how nervous would you feel daily? 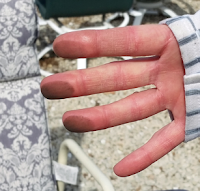 In 2008 before he was governor, he signed the Koch-backed “No Climate Tax Pledge,” by Americans for Prosperity, that he will oppose any legislation relating to climate change—presumably a cap-and-trade plan or a carbon tax—that would result in a “net increase in government revenue.”Walker has argued, based on a study funded by the coal company Peabody Energy, that the new rules are “unworkable” because they would be too expensive for manufacturers and residents.

Urban Milwaukee: You might call Walker the King of Coal. Just nine states in America are more dependent on coal than Wisconsin. The state now gets 63 percent of its energy from coal, up from about 55 percent when he took office. That’s largely because the Kewaunee nuclear power plant was closed, but it’s also because the state has been asleep on solar and wind power for six years.