Justice Dallet on MSNBC...and the Millennial Student Movement a takes off!

Even after being asked specifically about Democratic support over and over by Lawrence O'Donnell, Justice Rebecca Dallet remained incredibly neutral. It was impressive, and apparently a quality that even many conservatives voted for:

The voting maps are also changing, especially in the more politically independent parts of the state. WKOW:

And we can thank the energized Millennial movement: 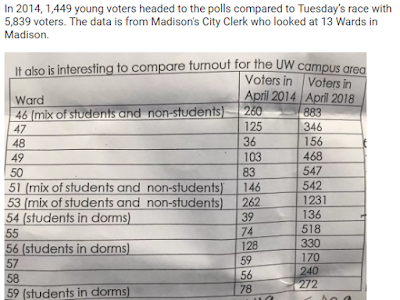 Mayor Soglin believe a big reason behind it is more voters are invested in the issues around them like gun reform, student loan debt and affordable housing.

Another factor for big turnout is the NextGen American campaign that spent millions to encourage the youth to register to vote and former attorney general Eric Holder’s group the National Democratic Redistricting Committee investing $165,000 in digital ads.

NOTE: WKOW's Emilee Fannon's reporting has been impressive, considering how rough her first few weeks looked. I was worried after Greg Neumann left, but not anymore, I'm impressed.
Posted by John Peterson, Democurmudgeon at 4/06/2018 11:42:00 AM