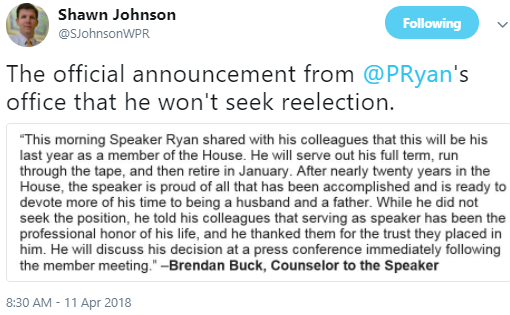 Wonder why? Perhaps the CBO's recent report had something to do with it? Here's Paul Ryan's legacy? 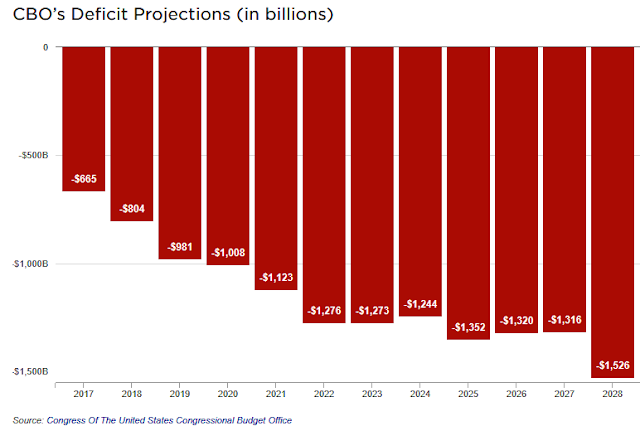 ...(as Speaker) his annual salary will get a healthy bump from $174,000 to $223,500. The Republican from Wisconsin is worth millions, according to his most recent financial disclosure form.

While Ryan leaves the U.S. in deep debt:

As the House prepares to vote this week on a largely symbolic balanced-budget amendment to the Constitution, its own budget watchdog delivered a stark reality check Monday that forecasts the return of $1 trillion-plus annual deficits and a ballooning public debt that will approach $29 trillion by the end of the next decade. the latest report is the first since the GOP enacted a $1.5 trillion tax cut ... The tax law that President Trump and congressional Republicans passed in December will cut government revenue by $1.3 trillion from 2018 to 2028 ... When the costs of paying interest on that debt are included, the tax cuts’ total addition to the deficit comes to $1.9 trillion,

The national debt is on track to approach 100 percent of gross domestic product (GDP) by 2028, said the nonpartisan CBO, which analyzes legislation for Congress. “That amount is far greater than the debt in any year since just after World War II,” CBO said. The expiration of lower individual tax rates at the end of 2025 will add to slowed economic growth then, the CBO added.

There were $1 trillion deficit spending years most recently under President Barack Obama, primarily due to the economic downturn during the Great Recession, but deficit spending had been decreasing in recent years.

The analysis “confirms that major damage was done” by the new tax law and the spending bill, said Michael Peterson, head of the nonpartisan Peter G. Peterson Foundation. “This high and rising debt matters because it harms our economy,” said Peterson, whose group backs fiscal conservatism.

“During a time of low unemployment and economic expansion, we should be taking reasonable steps to put our debt on a sustainable path – but instead we are piling up trillions of bills,” he said.