It's important to note Gillespie started the now brutal back-and-forth. Here's the fear-mongering racist trash Gillespie spewed out earlier, an ad they never pulled off the air or apologized for:

Virginia Republican Ed Gillespie has released four ads that try to tie his Democratic rival for governor, Ralph Northam, to MS-13 gang violence, despite protests from Democrats and Latino groups that the commercials play on racial stereotypes.

The latest ad begins with a dark, hooded figure in a home holding up a baseball bat as the MS-13 motto “Kill, Rape, Control” flashes on the screen. Then, a narrator warns of violent crime linked to the street gang in Virginia — and accuses Northam of putting Virginia families at risk.

Northam, the state’s lieutenant governor, did cast a tiebreaking vote killing a ban on sanctuary cities, but the bill ultimately passed the state Senate, so Northam did not cast the deciding vote. It was later vetoed by Gov. Terry McAuliffe (D). Meanwhile, Virginia has no such localities, a fact that Gillespie has acknowledged but that is omitted from his ads.

Back at ya: Gillespie Can't Take the Heat: Gillespie's support for everything Trump pretty much says it all about his divisive campaign. Note, Brian Fallon is a CNN contributor, he has nothing to do with Northam's campaign, so the outrage over his comment is surreal. 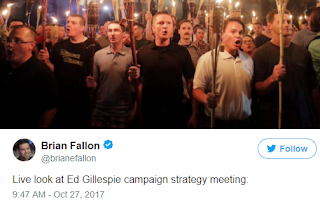 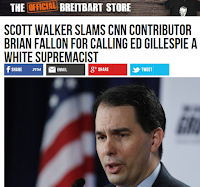 “Brian Fallon’s attack on Ed Gillespie is shameful, disgraceful, and has no place in American politics,” said RGA Chairman Governor Scott Walker. “Ralph Northam, Hillary Clinton and CNN should immediately denounce Fallon’s blatant attempt to score political points from a tragedy, and CNN should question whether it serves the network and the viewing public well by giving a microphone to Fallon’s hateful rhetoric.”

Earlier this week, Democrats sent out a flier with President Donald Trump and Gillespie’s images with a picture of the alt-right “Unite the Right” rally that took place in August in Charlottesville, VA, that read, “On Tuesday, November 7th, Virginia Gets to Stand Up…To Hate.”

Gillespie's campaign is so ugly that it got a special slot on "All in with Chris Hayes." So yea, pretty pointless bit of phony outrage over a CNN contributors comments: