Our economy is on fire? Wow, did you know that? That's just what Scott Walker said in an ad for Illinois Gov. Bruce Rauner's reelection campaign.

Illinois has been in big economic trouble for years, thanks to their hard line Republican millionaire governor doing his best "Scott Walker" impersonation. Rauner attempted to tank the entire Illinois state economy once and for all, after two years of red ink and no budget, when Democrat's raised taxes back up to their previous level. 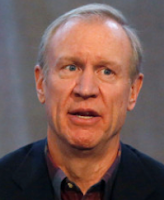 Gov. Scott Walker says Wisconsin's economy is "on fire" thanks to tax increases passed by Illinois' most powerful Democrat in a new political advertisement to help out a fellow Republican governor's re-election bid. House Speaker Mike Madigan, who this year became the longest-serving House Speaker in U.S. history, and his fellow House Democrats voted this year to override Rauner's veto of the state's first budget in two years and also to increase income taxes in Illinois from from 3.75 percent to 4.95 percent.

Ouch? Walker made it seem like were doing gangbusters up here. Maybe this will fly in Illinois, but north of the cheddar curtain, not so much. Thanks for nothing Scott Walker. In fact, the selected few months used in the ad to give the impression Wisconsin is doing gangbusters is deceiving, since just the opposite was true. Check it out here.

If anything, after watching the ad, you have to wonder if Walker was a little high on something. Nothing like a little over acting and slurred glassy eyed quips: