Voters are finally getting to see who the real Paul Ryan is, and why he's not their friend at all.

Looking out the little guy and fighting for the forgotten average American struggling to just get by is not the real Paul Ryan, and his tax cut plan piggybacked with the repealed ObamaCare subsidies (SRC) is Ryan finally showing his hand. Note: The subsidies are part of the ACA, the funding source unfortunately was inadvertently not specified:

Thanks to Ryan and Trump's threats to destroy the Affordable Care Act, insurance companies hell bent on making a profit are dumping out of the Marketplaces and raising premiums trying to stay ahead of the Republican chaos: 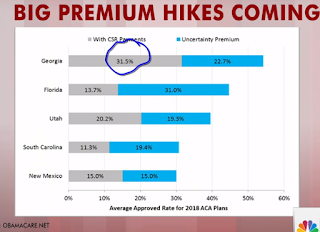 Think about it, any tax savings Republican voters were counting on will simply find their way into higher insurance premiums.

Not only did Ryan lie about the subsidies being illegal, since that has never been determined by the courts, but Ryan made it seem like the subsidies helped insurers merge into giant monopolies, something Republicans don't give a rats ass about. Mergers have been going on for years:


In a statement to reporters, White House press secretary Sarah Huckabee Sanders said Thursday night the administration concluded that Congress had not appropriated money for the subsidies and thus they were "unlawful payments" to "bailout insurance companies."

Paul Ryan signaled Monday he does not want to restore Obamacare subsidies that President Donald Trump is cutting. Instead, Ryan said, Congress should take a more comprehensive approach the answer is not to shovel more money at a failing program that is doubling premiums and causing monopolies.

"Propping up Obamacare and just giving insurance subsidies to insurance carriers to keep a failing system propped up is not the answer."

But unlike Ryan, Steve Bannon came right out and told the truth:

Bannon said Trump's decision to not continue funding Obamacare subsidies, was designed to "blow up" the health-care law and insurance marketplaces. "Gonna blow those exchanges up, right?"

Anyone still think Paul Ryan is even remotely serving the people who voted for him?
Posted by John Peterson, Democurmudgeon at 10/17/2017 09:57:00 AM