A "sense of hopelessness" is now settling in. After the Las Vegas massacre, it's become obvious Washington Republicans have detached themselves from reality and their constituents, digging in on what can only be described as a societal death wish.


The Horror in Las Vegas seemed to change nothing at the Capitol. House Speaker Paul Ryan promoted the virtues of mental-health care.

Really? What about this...


Donald Trump repealed without public display an Obama administration gun regulation that prevented certain individuals with mental health conditions from buying firearms. Only 3% to 5% of all violent crimes involve people with psychiatric disabilities, including conditions such as schizophrenia or bipolar disorder ... (Ryan) has proposed stripping away community and medical supports from people with mental health needs ...

How bad is the GOP death wish by gun? If this guy isn't convinced, no Republican will ever move an inch:


Steve Scalise, who was back on the job for the first time in months after a disgruntled shooter ambushed congressional Republicans on a softball field in May ... Scalise had told 60 Minutes that the attack on him did not diminish his belief in the Second Amendment and credited his security detail with saving his life. "If it's not a gun, it'll be a hand grenade, or it will be a knife or an ax," he said.

Patrick Dunphy, an attorney who has sued a gun shop said, "If Sandy Hook didn't result in legislation that either eliminated or restricted the type of guns that can be sold, or the people to whom they can be sold, nothing will ever change. When you have someone slaughtering kids in a grade school, if that isn't enough, what is?"

Who are these elected officials, and why are they dead set on siding with just 3 percent of the lunatic fringe who own nearly half of all firearms in the US? This recent Pew Survey proves D.C. Republicans aren't trying to represent their constituents: 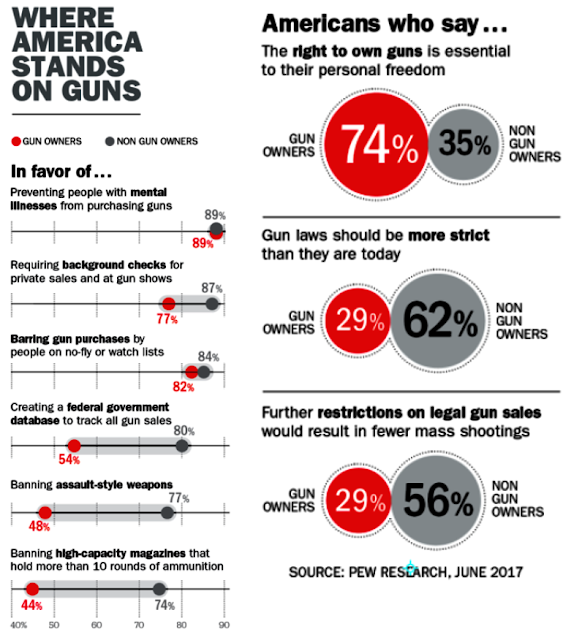