Come on folks, this is an easy one, and we've been letting Republicans get away with it for years...think about it: The absurdity of striking a "balance" between clean water and air for a few extra jobs and cuts to regulation. Let's see..."a little" dirtier water and air in exchange deregulation and possible jobs?


“As EPA administrator, Scott Pruitt is working to strike an appropriate balance between protecting water and air, and preventing the kind of job-killing overregulation,” McConnell said, according to CBS News, adding that Pruitt has been working to “stop the war on coal in its tracks.”

And yet, a new UCS analysis found that humans can effect climate:


Between 2008 and 2016, 17 percent of US coal capacity retired. Another 4 percent converted to other fuels, mostly natural gas. These closures led to:

Clean Coal Lie Exposed by Coal Baron: Trump shot off his mouth again, without thinking, stirring up his mindless base:

Trump boasted, “We’ve ended the war on beautiful, clean coal, and it’s just been announced that a second, brand-new coal mine, where they’re going to take out clean coal — meaning, they’re taking out coal, they’re going to clean it — is opening in the state of Pennsylvania.”

Another Trump Lie: Take it away Murray Energy's CEO, and "member of the American Coalition for Clean Coal Electricity — which has spent tens of millions of dollars trying to persuade the public that clean coal is the solution to global warming:"

Oh, don’t forget how well the move to “clean coal” is going:

Mississippi pulled the plug on one of the country’s biggest CCS efforts last month after the company spent billions on trying, and failing, to make it work. Mississippi utility regulators finally figured out the best way to make the state’s wildly expensive “clean coal” plant much cleaner and more affordable: Skip the coal part entirely.

Free Market Winners and Losers? Nope: Former Republican, turned Democrat, and then Republican again Gov. Jim Justice posed this not so free market idea based on the fear the eastern energy grid might not be secure: 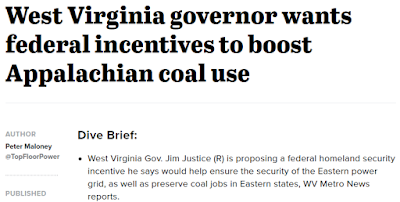 
Energy Secretary Rick Perry ordered up a study of the reliability of the nation’s electrical power grid. The coal and nuclear power industries had been arguing that the system faced challenges that required special breaks for their energy sectors.

The study was released, and it found the energy grid is in pretty good shape. Wind and solar power are playing an important role on the grid. Cheap natural gas, not government regulation, is primarily responsible for the closing of coal-fired plants … alternative sources like wind and solar are cheap, clean and growing, and appliances are more energy-efficient, meaning energy use is down.

And again, for all those “free market” right wing purists…let's spend taxpayer money on dying industries:

The coal and nuclear industries have been arguing that they need better compensation for the reliability of their energy contribution … the nuclear power industry, which accounts for 20 percent of the U.S. electrical supply, are extraordinarily expensive, and older plants are closing. Illinois is among the states subsidizing aging nuclear plants just to preserve jobs. market forces make such investments dicey.