After bashing Democrats for trying to bring Agricultural Hemp Industry and jobs to state for over a decade...GOP on board?

It's taken over 15 years to bring industrial hemp farming and jobs to Wisconsin, thanks to our anti-business Republican legislature who's favored list of businesses is limited to only the largest campaign contributors. What happened? 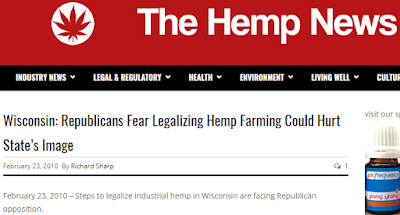 We didn't want to "tarnish Wisconsin's image," or give the impression we're a bunch of drug induced hippies milking cows and eating cheese.

But industrial hemp has seen huge growth nationwide...just not here in Wisconsin. After all, anything pushed by those 60's pot smoking liberal Democrats was just a marijuana smoke screen to legalize another burgeoning industry nationwide, recreational pot. I wonder how long we'll have to wait for that?


February 23, 2010 – Steps to legalize industrial hemp in Wisconsin are facing Republican opposition. All Republicans on the Assembly Agriculture Committee recently voted against a measure passed by the Democratic majority, which would allow Wisconsin farmers to apply for permits to grow hemp.

Make no mistake, Republicans didn't have any fact based, or science based reasons for their opposition...just a lot of mindless excuses that made sense then...until now:


State Representative Al Ott (R-Forest Junction) says there are worries about the drug connotation of hemp, which could tarnish Wisconsin’s image. He says there’s also no infrastructure to support a market for the product. Ott says he understands farmers are struggling in the tough economy, but he doesn’t feel it’s time to dilute the agriculture industry.

Now, agricultural hemp is a Republican idea. Hey Democrats...anyone want to remind voters who could have brought thousands of jobs and saved hundreds of family farms mentioned below well before our GOP overlords caught on? It's suddenly a high tech magnet for rural Republican areas (Foxconn fever baby).

Let's see, we were once a leader in hemp production, then what happened? Drug connotations...tarnish our image...dilute the agriculture industry...no infrastructure....blocked legislation for over a decade...yea, I wonder what happened (see and click image of history above):


Guest speaker: "We have watched our state farmers close generational farms year after year. We have lost farmers in the thousands...this is transformational."