When Scott Walker brags about keeping energy costs low in Wisconsin by doggedly standing by the coal industry, keep this amazing fact in mind:

Industry analysts are warning that Trump administration efforts to support coal and nuclear energy by repealing the Clean Power Plan could upend wholesale markets and drive up electricity rates for Wisconsin consumers.

Wisconsin Slammed the Door on dangerous Wind Energy 5 years ago: Wisconsin Republicans turned away an entire industry and the massive jobs it is now creating elsewhere, long before Trump stepped in to save the dying coal mines. The rhetoric below seems idiotic, and almost funny now:

Sheboygan Press Sept. 2012: State Sen. Glenn Grothman plans to introduce a bill that would freeze renewable energy requirements for Wisconsin utilities at 2012 levels in an effort to stop wind farm development throughout the state. The announcement comes as a developer is looking to build a wind farm in the West Bend Republican’s senate district in southwestern Sheboygan County. Officials with RENEW Wisconsin said Grothman’s proposal would be “profoundly detrimental” … “It would send a big message to the wind industry that Wisconsin is not open for renewable energy business,” said Michael Vickerman, program and policy director with RENEW Wisconsin.

WPR April 2013: People who claim that wind turbines make them sick would be able to sue wind developers under a proposal introduced by Republican state Senator Frank Lasee's (la'-say) ... bill would allow families that claim to be physically or economically affected by wind turbines to sue the companies that own them and property owners hosting them. Chris Kunkle represents the American Wind Energy Association in Wisconsin says Lasee's bill is par for the course: "This is just another attempt from Senator Lasee to install a level of uncertainty across the industry. It's another piece of his ongoing hostility towards an industry that creates manufacturing, construction, operation and maintenance jobs all around the state." 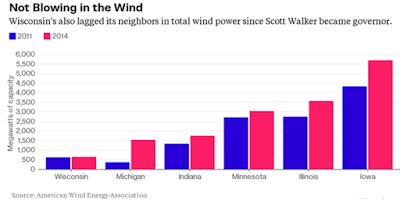 Sen. Lasee's concerns about nearby wind developers harming local citizens does not transfer over to those who will be near mines, where Republicans are pushing a bill that would harm local towns and villages. their roads, water and air, by eliminating local control:

The repeal of Wisconsin's so-called mining moratorium would limit public opportunities to contest DNR decisions ... Repeal a law requiring the DNR to deny a mine's request for a high-capacity well that would unreasonably harm the ability of others to have drinking water or enjoy lakes and streams.

And while we spend billions of taxpayer dollars for up to 13,000 possible jobs relating to Foxconn, look at what Iowa did by simply supporting wind energy:

Iowa had about 30,400 clean energy jobs last year, nearly 7 percent more than in 2015, an industry group estimates.
Iowa is already a renewable energy leader. It gets 36.6 percent of its energy from wind, leading the nation in the percentage last year. It ranks second nationally in the amount of wind energy generated, according to the U.S. Energy Information Agency. Wind is second only to coal as a source of energy.

Brenna Smith, a spokeswoman for Gov. Kim Reynolds, said Iowa's large renewable energy portfolio has been a leading factor in landing economic development projects such as Apple and Facebook data centers. But without the Clean Power Plan, environmental leaders say Iowa's wind-energy manufacturing industry — building wind blades, nacelles and towers — will lose out on business and jobs if other states are no longer required to adopt wind, solar and other clean energy technologies.

"Iowa sees significant economic benefits from wind and solar development that would have only increased with implementation of the Clean Power Plan," said Nathaniel Baer, the Iowa Environmental Council's energy program director. "Manufacturing jobs would have likely increased ... as Iowa and other states in the region shifted to renewable energy," Baer said.

Costs are declining for both wind and solar energy, Baer said, adding that wind is the cheapest form of new energy capacity installed today — even without federal production tax credits (that end in 2020).

Trump and Pruitt's Clean Power repeal is time wasting Republican wheel spinning, since even big energy has moved on from coal, considering Trump's move just a blip in time:


MidAmerican says its construction of 2,020 turbines across 23 counties has created about 3,800 jobs with $230 million in payroll. The wind farms support 320 permanent workers earning an average of nearly $69,000 annually, a total of $22 million a year. The investment and jobs help keep hospitals and schools open and pay for county roads and bridges, said Michael Fehr, who leads MidAmerican's wind development. Wind revenue helps counties "maintain their rural way of life."

...or this "free market" renewable movement ignored by Republicans:


St. Louis Post-Dispatch: EPA proposes killing Clean Power Plan, but market already cutting carbon. Market forces continue to push down the cost of renewable energy and keep natural gas competitive with coal, the most carbon-intensive fuel used by power plants. And there’s still almost no interest among utilities to invest in new plants as old ones retire. And after President Donald Trump was elected and signaled he would repeal the carbon regulations, Ameren opted to make the biggest renewable energy announcement in its history. Just two weeks ago, the utility said it planned to spend $1 billion on some 700 megawatts of new wind power by 2020. That’s about three-quarters of the capacity at its Sioux coal plant in St. Charles County. “For Ameren, the markets were penalizing them for being not diverse.”

By next June, Dayton Power and Light (DP&L) will close two coal-fired plants in Adams County, Ohio What’s happening in the two Ohio River counties, little more than an hour’s drive from booming Cincinnati, illustrates how powerful trends in technology and finance are quickly reshaping American electricity markets, Kabel of DP&L said that the proposal did not sway the utility. “The company has not made any changes to its previously announced plans,” she said.

Pfeffer, of Mason County, said he is not surprised. “What I’m seeing from generators, they see whatever measures that happen in this administration as a blip. They don’t see it as something that is long-term.”

Here's a timeline projection of what we can expect from renewable energy: 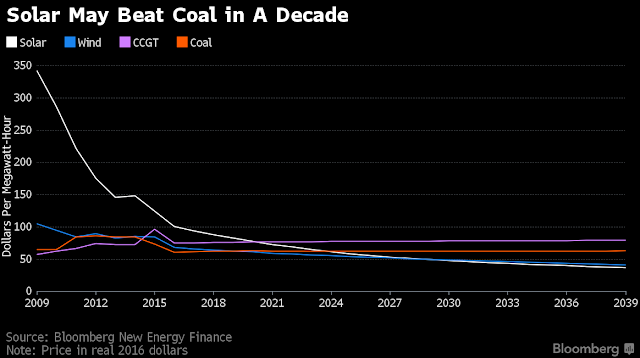