There's no way I can set this up any better than the Washington Post: 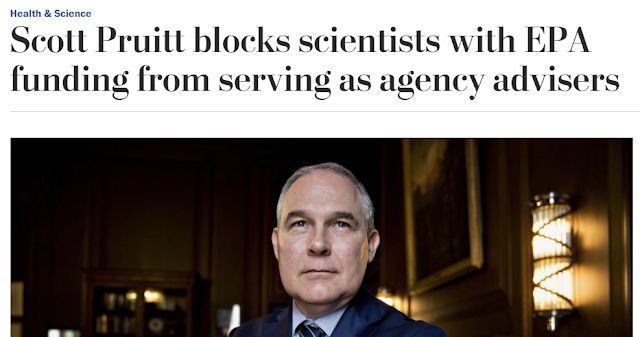 That means only corporate research scientist and conservative climate deniers will be guiding the US's environmental future.

In the upside-down logic of Republican bizarro world domination, only this could make sense:

“It is very, very important to ensure independence, to ensure that we’re getting advice and counsel independent of the EPA,” Administrator Scott Pruitt told reporters Tuesday. He argued that the current structure raises questions about their independence, though he did not voice similar objections to industry-funded scientists.

But the EPA is already independent...like the government is supposed to be...or used to be, where policy depended on science and served the American people. It wasn't supposed to be political. Not anymore!!!

But Pruitt has a more clever motive; force scientists to abandon their important possibly breakthrough research.


He noted that researchers will have the option of ending their grant or continuing to advise EPA, “but they can’t do both.”

For the hardcore religious Republican voter that has invested all their faith in Trump and God, in that order, Pruitt's angelic con went something like this:


Pruitt on Tuesday used the Bible to explain his major changes:“In the book of Joshua there is a story about Joshua leading the people of Israel into the promised land after Moses passed away. And Joshua says to the people of Israel choose this day whom you’re going to serve. And I would say to you this is sort of like the ‘Joshua Principle’ that as it relates to grants to this agency, you are going to have to choose either service on the committee to provide counsel to us in an independent fashion or you can choose grants, but you cannot do both.”

And what about corporate scientists...? Will they ever be free from corporate influence?


EPA will not impose a similar litmus test on scientific advisers who receive grants from outside sources.

The likely appointments include several categories of experts — voices from regulated industries, academics and environmental regulators from conservative states, and researchers who have a history of critiquing the science and economics underpinning tighter environmental regulations.

Reagan Republican Agast: The current Republican Party is so far out now that not even Reagan administration officials can make sense of this:


Terry F. Yosie, who was the advisory board’s director during the Reagan administration, said the changes “represent a major purge of independent scientists and a decision to sideline the SAB (Science Advisory Board) from major EPA decision-making in the future.”

Andrew Rosenberg, director of the Center for Science and Democracy at the Union for Concerned Scientists, said in a statement. “The consequences of these decisions aren’t just bad for a few scientists. This could mean that there’s no independent voice ensuring that EPA follows the science on everything from drinking water pollution to atmospheric chemical exposure.”

This all makes sense if you believe the EPA, its scientists, the government are all politically liberal and Democrats. Only hearsay science, anecdotal stories, and special interest scientists know what's really going on. Here's the Bizarro World code from DC Comics, see if you see any similarities: 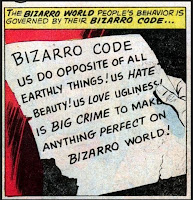 The possible Pruitt board might include one of the EPA's biggest critics backing coal:


Pruitt said, “If we have individuals who are on those boards, sometimes receiving money from the agency . . . that to me causes questions on the independence and the veracity and the transparency of those recommendations that are coming our way.”

At least three potential appointees ... one of them, Larry Monroe, previously chief environmental officer at Southern who's particular expertise in how the EPA regulated emissions from coal-fired power plants and criticized the Obama administration’s Clean Power Plan argued that the plan, intended to reduce carbon emissions, was “unworkable and would increase electricity prices to customers while hurting reliability.”

If you had to take away one important lesson from Republican Pruitt's actions at the EPA, I think this might sum it up:

Michael Honeycutt, head of the Texas Commission on Environmental Quality’s toxicology division, who Pruitt announced Tuesday as the new head of the Science Advisory Board. Honeycutt has suggested that the health risks associated with smog are overstated.