To Republicans, NFL Football a welcome relief from the suffocating demands of Free Speech.

It looks like Trump is winning the NFL kneeling debate? That was the text I got from my conservative friend in Milwaukee, bragging about the decline in NFL ticket sales. What about Trump hurting another American businesses bottom line. Go patriotism.

But flag waving nationalism should scare us, and I'm horrified it doesn't. Dictators thrive on this kind of stuff. My conservative friend said he doesn't want the politics, but that's like say you don't want the First Amendment during football. These are "cafeteria constitutionalists," who often talk about being strict constructionists, all the while defending an imagined "respect the flag" requirement.

He also sent me this phony patriotic gem by Fulton Homes, standing up for those hard fought freedoms they now want to take away:

GOP Worship of Statues and Symbols Exposed: Flag pins and car magnets supporting veterans were the early symptoms of a bigger problem, phony patriotism. So the time was right for a flaming nationalist bigot and racist like Trump to ignite a nationalist fire that would rage out of control for decades to come.

Disrespect? Are Americans really this Stupid? The most troubling part? That so many people think there's an acceptable time and a place for the 1st Amendment. I say give up your season tickets and let real fans and families fill the stands, especially Trumpian Packer ticket holders.

or what about the two high school football players tossed of their team by their Marine veteran coach, who never really got the whole concept of fighting for our freedom:


Sophomore Cedric Ingram-Lewis and his cousin Larry McCullough were kicked off their team at Victory & Praise Christian Academy, the Houston Chronicle reported. The pair didn't play in the Friday night game for their private church-affiliated football program in the Houston suburb Crosby.


Republicans in Wisconsin made it mandatory for high school graduates to take a civics test. Phony patriotism, sure, but ironically something we apparently desperately need...for Republicans:

When we asked fans if the controversy would make them more or less supportive of the NFL, 71% said less and only 15% said more. Of those who said they are now less supportive, 74% said their change of heart was permanent, and only 3% said they felt it was temporary. Public attitudes are fickle, and it’s entirely possible boredom with the issue — or terrifically exciting football — could make people forget before long. The NFL, after all, has faced other disturbing issues that didn’t seem to dent its popularity.

I thought the response below spelled it out perfectly:


"I can't walk past the television screen, news or sports, without seeing this on the bottom line; "NFL players protest anthem."  It is amazing to get a fact error in a four word headline." 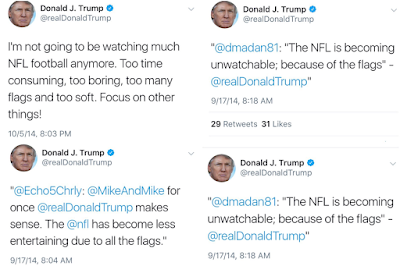