I've never understood shouting down guest speakers on campus. Maybe adding a profound comment during the lecture would be more effective. Or make your point if there's a Q and A afterwards. Even better was this fun story, as told by another whiny conservative victim..: 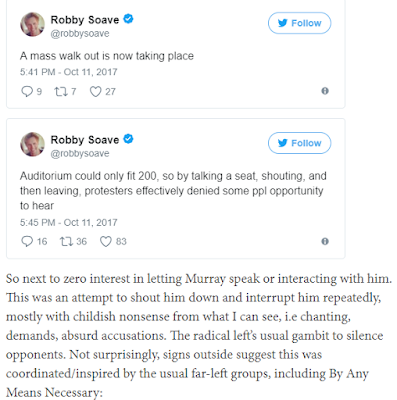 War on College: The point is, it's interesting to watch Republicans pollute campuses with mindless ideological dogma, unrelated to actual curriculum, all the while drumming out and vilifying liberal professors nationwide with their finely tuned network of elitist media stars and anonymous social networking trolls.


Katie Pavlich, a 29 year old Fox News contributor and author, spoke to a nearly full lecture hall about the history of the Second Amendment, follows the passage of a policy that will sanction students across the University of Wisconsin System for disrupting free speech.

Pavlich's "lecture" went on without a hitch, uninterrupted. Oh oh, that can't happen, because then no one would have noticed. She would be just another gun nut speaking to the choir.

So, leave it to Pavlich to take a shot at the protesters outside, allowed under the new UW pollicy:

Outside of Brogdon Hall a couple dozen people waved around sex toys in the rain to protest Pavlich ... making a comparison between laws and policies barring the display of obscene materials in public, and being able to carry a firearm in public.

Pavlich said the students’ actions were “sexual harassment” and called it “immature, silly, absurd, and really quite frankly, out-right dumb.”

Brave Katie Pavlich, bashing the free speech rights of protesters outside, by calling them names? Now that's what I call college level "diversity, cultural awareness, and tolerance.” The Republican sponsor of the free speech bill Robin Vos should be proud...

Vos: "Civility begins by appreciating and understanding that the other point of view isn't wrong...it's just...you don't agree with. It's not evil, it's just perhaps somebody you need to inform."

What, you don't have a gun around? You "silly, absurd, and really quite frankly, out-right dumb" liberal, don't you know you've created a public "death trap," a favorite target of law abiding gun toting mass murderers.


Pavlich called gun-free zones, such as the buildings on the Madison campus, “gun-free death traps.”

Personally, that would make every room in my own home a gun-free death trap." And hasn't the loosey-goosey right to bear arms created these "death traps?"


The UW-Madison chapter of the student organization Young Americans for Freedom sponsored Pavlich’s lecture and hosted Ben Shapiro, a former editor for the conservative news website Breitbart, on campus last fall. While he spoke, students shouted him down several times.

Conservative foundations that for years have quietly given money to help student groups bring speakers to college campuses recently have been under scrutiny in the wake of speaker protests, suggesting the push for conservative views is from off-campus. The Milwaukee-based Lynde and Harry Bradley Foundation in recent years has given Young America's Foundation tens of thousands of dollars for such activities as increasing the number of conservative-leaning campus events it sponsors, including in Wisconsin."

What about the threat of big government Republican purging professors they don't agree with?


The most recent case involves professor Olga Perez Stable Cox at Orange Coast College in California. An anonymous student in her human sexuality class secretly recorded Cox discussing her political views. She referred to Donald Trump as a “white supremacist,” his running mate Mike Pence “as one of the most anti-gay humans in this country” and their election as an “act of terrorism.”

Her words were clearly liberal … In the days since her “act of terrorism” talk ripped across the Internet, she has received terroristic death threats herself. Cox has since fled the state. Meanwhile, the Orange Coast College Republicans — the group that disseminated the gotcha video — is campaigning for her firing.

In a similar vein, the conservative group Turning Point USA recently published a “Professor Watchlist,” a catalogue of what it thinks are dangerous and “anti-American” professors who deserve public shaming for allegedly trying to “advance a radical agenda in lecture halls.”