Our authoritarian overlords don't like it when liberals, Democrats and progressives make them look bad. Like voter suppression.

Taking a line from Republican know-it-all's who bashed Jimmy Kimmel for criticizing their health care plan; what does a comedian like Mitch Henck know about voter suppression? What makes his media elitist opinion count?

In a whiny opinion piece, Mitch pondered why the  two biggest Democratic counties in the state looked into voter suppression via the voter ID law, without the approval of our authoritarian overlords in the state legislature: 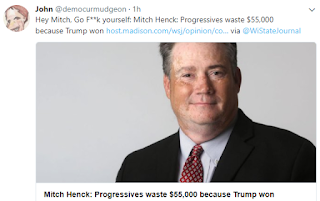 So why did The Dane County Board vote to spend $55,000 to study Wisconsin election law in Dane and Milwaukee counties? After all, the study wasn’t authorized by the state Department of Justice or state lawmakers or state election officials.

Hey Mitch, ya think state lawmakers and the Justice Dept. were wondering how their voter ID laws discouraged people from voting? Didn't think so:


The study, by UW-Madison political science professor Ken Mayer, was pushed by progressive Dane County Clerk Scott McDonell and approved by our progressive County Board. About 2,400 surveys were sent out and 293 people responded. From that, the professor figured that:


1. Nearly 17,000 people in Milwaukee and Dane counties didn’t vote because of the state Voter ID law.

2. Roughly two-thirds of the respondents said they didn’t vote because of the Voter ID law, even though they had legal IDs.

“That’s the point,” Dane County Board Chair Sharon Corrigan said. “People are confused.” She added the old chestnut, “This is a solution in search of a problem.”

Mitch had a hard time understanding why anyone would even care if a few people lost their vote, and because HE didn't, why waste $55,000 on something the state would never even think to study themselves:


I asked her why Dane County taxpayers were paying for a study of a state law and how it was affecting Milwaukee County. “I wish the state would do a broader study,” Corrigan responded, “but we did what we could because compliance with this law is costing the state way too much.”

Of course this was all a waste of taxpayer money...studying something that strikes at the heart of our representative democracy. It's at this point Mitch suddenly cared more about abuse victims and road repairs, then people voting. So Mitch blamed this on just another liberal tantrum (projection much?):


That’s interesting. We are talking about taxes and fees of people living in Dane County. Board members didn’t spend the $55,000 on road repair or shelters for domestic abuse victims. They spent it on a study that gathered 293 responses and calculated from that that nearly 17,000 people didn’t vote in two counties because of a state law Dane County Board members and the clerk really hate.

Mitch then decided he needed a little backup, so he included knuckle head Matt Adamczyk's response, and propaganda think tank MacIver Institute's assessment that only 9 people were kept from voting. Yea, what's the big deal. Oh, may I remind them Scott Walker said if only one person lost their vote via fraud, that was one too many? Were talking nine...but that's different?


Wisconsin Treasurer Matt Adamczyk, who ran on getting rid of his office, went so far as to say Dane County should lose $55,000 in state revenue sharing because it wasted local taxpayers money on the election study.

The conservative MacIver Institute blasts the study for basing its results on too small of a sample. MacIver points out that only nine people of the 293 respondents were kept from voting by the ID law. But survey architect and UW professor Mayer says the respondent number is fine for an estimated 150,000 registered eligible non-voters in the two counties.

It's at this point Mitch ran out of wacky ideas, so it was time to drag out some good old right wing name calling and stereotypes:


The problem is that hard-core progressives on the County Board can’t change state law no matter how many cappuccinos they consume before their meetings. That job is still up to those darn state legislators, whether they are gerrymandered or not.

Of course Mitch much have been away on vacation or something when Democrats opposed all those voter suppression laws passed by Republicans, because the study really had more to do with...Hillary?


It’s safe to say that supervisors would not have spent our money on the study had Democrat Hillary Clinton won the White House.


I sympathize with legitimate voter grievances. But I roll my eyes at the Dane County Board when it spends our money like candy because progressive supervisors didn’t get the results they wanted and threw a tantrum.

For anyone who cares about reality and facts, here's what Ken Mayer had to say on WPT's Here and Now: