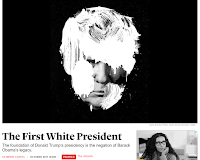 It has always fascinated me to see how Republicans were always hell bent on destroying everything liberal. They hate it when they see the Democrats solving the countries problems with big government liberalism. So what's their counter attack? Simply repeal the Democratic agenda. That's it! Problems, what problems?


1. His political career began in advocacy of birtherism, that modern recasting of the old American precept that black people are not fit to be citizens of the country they built. But long before birtherism, Trump had made his worldview clear. He fought to keep blacks out of his buildings, according to the U.S. government; called for the death penalty for the eventually exonerated Central Park Five; and railed against “lazy” black employees. “Black guys counting my money! I hate it,” Trump was once quoted as saying. “The only kind of people I want counting my money are short guys that wear yarmulkes every day.” After his cabal of conspiracy theorists forced Barack Obama to present his birth certificate, Trump demanded the president’s college grades (offering $5 million in exchange for them), insisting that Obama was not intelligent enough to have gone to an Ivy League school, and that his acclaimed memoir, Dreams From My Father, had been ghostwritten by a white man, Bill Ayers.

2. Trump is the first president to have served in no public capacity before ascending to his perch. But more telling, Trump is also the first president to have publicly affirmed that his daughter is a “piece of ass.” The mind seizes trying to imagine a black man extolling the virtues of sexual assault on tape (“When you’re a star, they let you do it”), fending off multiple accusations of such assaults, immersed in multiple lawsuits for allegedly fraudulent business dealings, exhorting his followers to violence, and then strolling into the White House. But that is the point of white supremacy—to ensure that that which all others achieve with maximal effort, white people (particularly white men) achieve with minimal qualification. Barack Obama delivered to black people the hoary message that if they work twice as hard as white people, anything is possible. But Trump’s counter is persuasive: Work half as hard as black people, and even more is possible.

3. For Trump, Obama ... a black president, insulted him personally ... when Obama and Seth Meyers publicly humiliated him at the White House Correspondents’ Dinner in 2011. Replacing Obama is not enough—Trump has made the negation of Obama’s legacy the foundation of his own. And this too is whiteness. “Race is an idea, not a fact,” the historian Nell Irvin Painter has written, and essential to the construct of a “white race” is the idea of not being a nigger. Before Barack Obama, niggers could be manufactured out of Sister Souljahs, Willie Hortons, and Dusky Sallys. But Donald Trump arrived in the wake of something more potent—an entire nigger presidency with nigger health care, nigger climate accords, and nigger justice reform, all of which could be targeted for destruction or redemption, thus rectifying the idea of being white. Trump truly is something new—the first president whose entire political existence hinges on the fact of a black president.