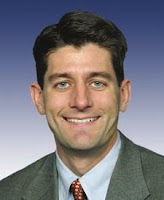 The biggest story missed by the Democrats and media outlets: GOP plan drops constituent health coverage faster than any plan proposed by the Democratic Congress.
For all those Republican town hall protesters worried they’ll lose their current health insurance because of the public option, the plans they love and have the freedom to keep and pay for, will be dropped immediately with Rep. Paul Ryan’s reform plan.
Here’s the question posed on Ryan’s web site, followed by his answer. You’ll notice he answers “no” but details a plan that does just the opposite. People will lose their current doctors and plans, period:

Q: Doesn't this undermine existing employer-based health care, and push workers into the private market to fight big insurance companies on their own?

A: No. Americans who like their employer-sponsored health benefits will be able to keep what they have. But individual Americans should make that decision – instead of falling victim to arbitrary tax rules or staying in a job only because they can’t afford to lose their health insurance. Tax breaks should go directly to every individual with a health insurance plan.

That will cancel tens of millions of employer health care plans, doing away with a conservative voters favorite doctors and insurance plan. The same objection they’re raging about now at Democratic town hall meetings. Ryan displays outright hostility toward those happy with their current employer based plans.

Although the employer-based tax health benefit helped expand health coverage during and after the war, it has evolved into an expensive, inflexible, and unfair subsidy, and is out of step with today’s diverse, and rapidly changing workplace. It also contributes to the insecurities felt by those who have employer-based health insurance, because they fear sacrificing coverage if they lose or change jobs.

But wouldn’t this plan do away with a families favorite plan and doctor? YES. And if this weren’t bad enough, a voluntary insurance system complicated with “additional safeguards” and insurance industry checks and balances paid, for by the government, sounds costly and ineffective. Anytime you have to make sure the insurance companies play fair, it would indicate a free market system ripe for “gaming.” Convoluted is a word that comes to mind. Check it out if you dare:

Any health insurance plan licensed in the state may participate in the Exchange, though plan participation is not mandatory. Participating insurers must offer at least the same standard health benefits made available to Members of Congress and are prohibited from discriminating based on prior medical history or existing conditions and must provide annual open enrollment periods to enroll newly eligible individuals. Individuals are guaranteed access to a health insurance plan through the Exchange.

To avoid cherry-picking of patients by insurance companies, exchanges can utilize mechanisms to protect enrollees from the imposition of excessive premiums, to reduce adverse selection, and to share risk. Options include an independent risk adjustment mechanisms, health security pools and reinsurance mechanisms. Once a plan is selected, the insurance company will claim the portion of the Medi-Choice rebate necessary to pay the premium. Some plans will be entirely covered by the rebate while others will require a monthly payment in addition to the rebate. For the first time, coverage will be available without regard to employment status.

Is there any chance a family can find a plan for $500 bucks a month? Ryan and his fellow Republicans are that disconnected.
Posted by John Peterson, Democurmudgeon at 8/06/2009 10:44:00 AM