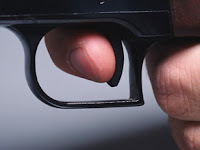 Yet another concealed weapons permit holder and “legal” gun owner, George Sodini, with no prior criminal record, committed mass murder. On the evening of Aug. 4, Sodini attacked an aerobics class at the LA Fitness gym outside Pittsburgh where he used three handguns, two of which used high-capacity ammunition magazines that could hold up to 30 rounds, to gun down three women and wound nine others before killing himself.
The shooting tragedy is yet another indisputable example that, despite gun lobby rhetoric, “law-abiding” gun owners and carrying concealed permit holders do commit crimes, including homicides and rampage shootings.
Prior to this attack, in 2009 alone, there have been three confirmed mass shootings committed by concealed carry permit holders. In April, Richard Poplawski ambushed four Pittsburgh police officers, fatally shooting three and injuring one. In March, CCW holder Michael McLendon killed 11 people, including the wife of a deputy sheriff, before taking his own life following a gun battle with police in Alabama. In February, CCW holder Frank Garcia killed four people in a shooting rampage in upstate New York.
Posted by John Peterson, Democurmudgeon at 8/12/2009 01:12:00 PM