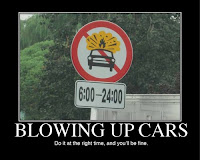 If you had any doubt about the Republican Party’s main objective, check out the following from AP:

The government's wildly popular "cash for clunkers" program is likely to end Friday if the Senate doesn't approve $2 billion more for it. But the legislation faces a tougher fight in the Senate, where conservatives deride it as the latest in a series of taxpayer bailouts for the auto industry and environmentalists want to wring out more fuel efficiency.

This is an open admission by Republicans that, regardless of any obvious stimulus success, they won’t back it. What matters is their ability to make things worse in time for the 2010 elections. Things aren’t working out they way they planned. We’re cutting our ties to the oil producing countries, slowly but surely.

Senate Republicans appeared to be in no rush Monday. "We were told this program would last for several months," GOP leader Mitch McConnell of Kentucky. "It ran out of money in a week, prompting the House to rush a $2 billion extension before anybody even had time to figure out what happened to the first billion. It's not a bad idea to look for a second opinion. All the more so if they say they're in a hurry."

What happened to the first billion? People bought cars, according to “information on 80,500 vehicle transactions logged into the government's operating system through Saturday afternoon. An official said the fuel efficiency improvements would save a typical customer $700 to $1,000 a year in fuel costs. The new vehicles were getting 25.4 miles per gallon on average, a 61 percent increase over the models traded in, said the official.

Is McConnell a complete idiot, or does he believe he can convince fellow Republicans who cashed in their clunkers that they really shouldn’t have?