Health Care and the Dizzy Array of Conservative Contradictions 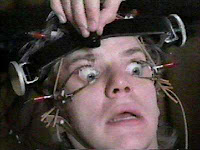 Is it any wonder why Republican voters appear confused over the details of any issue explained to them by their politicians. Take the idea of wellness programs for example in conservative Alabama. I’m going to briefly Answer parts of a recent article in Parade.com magazine that should point out the MASSIVE contradictions in the conservative argument about health care. There is also an underlying "public v private" contradiction going on here as well.

"Alabama state employees have until Nov. 30 to get screened for chronic illnesses such as diabetes and hypertension if they want to keep their free health insurance. After 2010, those at risk for disease must show that they are taking steps to improve their health or pay $25 each month."

A-1: This is the wrong time to raise the price of health care when people are looking for ways to cut their costs and buy only the insurance they need, without government meddling.

A-2: This is just another way for the government to gather more information about Americans, so they can ration care for those who have costly chronic diseases.

"Alabama’s move is just one example of a growing trend nationwide: Businesses are hoping to cut health-care costs by instituting “employee-wellness programs” in which workers are financially rewarded for quitting smoking, getting regular checkups, or losing weight."

A-1: Wellness programs drain taxpayer money so people can make unnecessary office visits when they aren’t really sick.
A-2: I don’t want government taking away more of my freedoms by penalizing me for my right to smoke at home.

Now let’s flip the Q & A around, by providing a real conservative’s support for a wellness program they normally would be objecting to if it were part of Obama’s reform package, followed by my “liberal” response:

"Dr. Darwin Deen of Montefiore Medical Center in New York (says) “Right now healthy people subsidize care for everyone else. Some people are asking: If you choose to sit and watch TV while I am out exercising, should I still be expected to pay for part of your health-care costs?'"

A-1: Is Dr. Deen trying to be funny when he states “Right now healthy people subsidize care for everyone else.” That’s the whole point of health insurance. That’s the actual centuries old business model of spreading the liability to lower the costs. No wonder right wingers don’t know if their coming or going.

A-2: “To sit and watch TV” is the straw man put out there for many who aren’t aware of all the reasons for obesity. It’s like the “Cadillac welfare queen” image in the later part of the 20th century. It’s wonderful to be fat, sitting on your ass watching TV and munching on Bon Bon’s all day. All of this from a doctor who should know better.
Posted by John Peterson, Democurmudgeon at 8/09/2009 11:29:00 AM