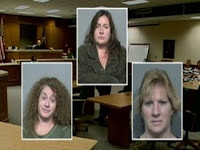 STOCKBRIDGE, Wis. -- Three Wisconsin women are accused of tying up and assaulting a married man after allegedly finding out he was having affairs with each of them. Authorities say Therese Ziemann punched the man in the face and applied Krazy Glue to other body parts.

The women reportedly taunted him as they glued his genitals to his stomach.

Ziemann lured the man to a Stockbridge motel last Thursday … she was soon joined by the other two women and the man's wife.