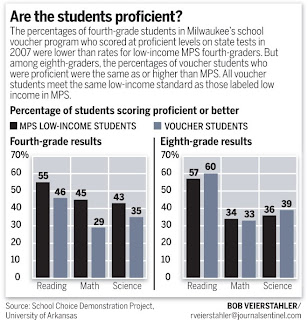 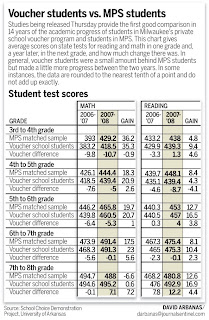 You've heard it before: Private school vouchers will save the day, and finally create an uber student, the likes of which the world has never seen before. Or the…”private school voucher program with students in Milwaukee Public Schools shows no major differences in success between the two groups.”
That’s the conclusion of a number of new studies examining the Milwaukee Public School System. From the University of Arkansas, JSonline:

The primary finding in all of these comparisons is that there is no overall statistically significant difference between MPCP (voucher) and MPS student achievement growth in either math or reading."

A second study, (of) not scientifically matched groups of MPS and voucher students, found that the percentages of fourth-graders in voucher schools who met the state's definition of proficiency in reading and math were lower than percentages for low-income MPS fourth-graders. For eighth-graders, the proficiency rates were about the same.

One of the studies concluded that, by a small margin, MPS results are better now than they otherwise would be because of the presence of voucher schools.

Oh really? Would it be possible NCLB and other educational advancements may have improved the public schools and not the voucher school presence itself? Besides, every time any research has been released resulting in lower voucher student performance, researchers are quick to leave the results open for further debate: “The researchers couched their findings in warnings that they were making no conclusions about the causes of differences between MPS and voucher students and only were describing what results showed.”
Brilliant. What they’re basically saying is the resulting facts, are only facts, so don’t jump to any logical conclusions. Even thought the results aren’t encouraging or up to the voucher hype, the price is right:

They show that the voucher system is educating children at less cost than MPS … The researchers wrote that the voucher program was "a rising tide that has lifted all boats, but that tide has not exactly been a tsunami."

The finding that voucher students weren't really doing any better is probably not good news for advocates. Also keep in mind that the research isn’t necessarily done by the most impartial group:

The School Choice Demonstration Project was given a green light to conduct extensive studies for five years.

The researchers did not release any information about individual schools … Many voucher critics want school-by school information to be made public … it was clear from data in the reports that there is a set of voucher schools that have very high results, while the bulk of the schools cluster around the average levels for MPS.

Patrick Wolf, the lead researcher, said the data on the progress being made by the comparison groups of MPS and voucher students will be more interesting in coming years. "Maybe with another year or two, one side will create some daylight" by improving significantly more than the other, he said.

So there it is.The for profit education industries solution to the public education problem. Nothing better, maybe worse, and no accountability unless of course they are subject to the same testing and answerability to parents complaints and requests for information.
Posted by John Peterson, Democurmudgeon at 3/30/2009 06:53:00 PM

Labels: Vouchers
Email ThisBlogThis!Share to TwitterShare to FacebookShare to Pinterest