Democrats Willing to "Give Up" Public Health Care Option. A Majority Party of Cowards. 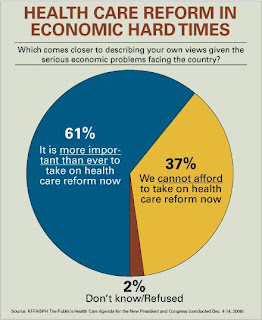 The following first paragraph of a Wall Street Journal story on health care reform should be a warning to anyone who thinks change is ever going happen in our lifetime.

Congress is poised for a battle over whether an
ambitious health-care overhaul should include a new government-run health plan to compete with private companies in the effort to cover the uninsured.

The public option is the only real reform being offered. Everything else would be just moving the deck chairs on the health care ship Titanic. Democrats know that, yet are still willing to “negotiate” this critical change out of the plan. I’m breathless.

“…Senate Finance Committee, Chairman Max Baucus has pledged to write a bipartisan bill. His partner, Sen. Charles Grassley … is adamantly opposed to the provision for a public health-care plan. As such, aides in both parties say it's unlikely a public plan will be included in the legislation now being negotiated.

I’m not sure what to make of this revelation. It’s either the conservative slant the Wall Street Journal is putting on the story, or Senate Democrats are seriously considering health care reform without a public plan. Again, I’m breathless. After all:

Sen. Baucus said last fall he, too, favored a public plan. The chairmen of the relevant House committees all favor it, too. Proponents say that will give people the choice of a nonprofit plan that will help keep costs low, particularly by controlling administrative costs. The government option will provide needed competition, they say. Republicans fear the government will have unfair power over the market.

Oh, you mean the same unfair power over the market insurance companies now have, as they ration care to bolster their bottom line? The health care debacle is in the private sector. To expand the private sectors involvement only makes the problem worse. Think about it: How can an insurance company make a profit spending money on making people healthy again? For them it’s simple: There will have to be a lot of losers, people who need to be treated, that won’t get the monetary help. On the other hand…

The House of Representatives is likely to include the provision in its version of the bill, expected in late spring or early summer, aides say. For liberal Democrats, many of whom would prefer that all Americans join a government-run health system, the inclusion of a public plan among other options for consumers is a fallback position that they are reluctant to give up. But even some supporters privately predict that it may have to go to get a deal done.

“Reluctant to give up…may have to go…?” What the hell are Democrats saying now? I’m sorry, did we just elect a super majority of Democrats promising health care reform or are they just a bunch of political cowards? Breathless would be an understatement. How crazy is this option:

At the heart of the larger health plan being contemplated is a government-organized health-insurance exchange through which individuals and small businesses could purchase coverage. Private companies would compete for business under a new set of rules, such as a ban on rejecting applicants who are already sick. Subsidies would be available to many people based on their incomes.

But opponents say a public plan would be an unfair competitor because it could become big enough to drive down reimbursements to doctors and hospitals, much like Medicare does, putting more cost pressure on the private sector. Consumers would then flock to the public plan because its premiums would be cheaper, opponents fear, and ultimately no viable private plans would remain.

That would be bad? The key point here, “Consumers would then flock to the public plan,” would seem to indicate a public preference for A BETTER PLAN. How unfair. It’s hard not to cry alligator tears for the insurance industry, but...

Karen Ignagni, president of America's Health Insurance Plans, the industry lobby group. "It's a very short step to a Medicare-like program for all Americans in a single-payer system," she said.