Thank You Free Market Republicans, No Competition and No Newspapers.

So this is what a predominantly free market, small government system looks like? Have you noticed the disappearance of our competitive business climate? I have, and I don't like it one bit.

In the last 2 years, in electronics alone, we've lost CompUSA and Circuit City. If you've ever want to shop for a TV, stereo, car radio, computer, camera, DVD, CD, software, game or cell phone, your choices have been narrowed down to Best Buy or a possible local outlet lacking the low prices and buying power of a chain. That in turn means we all end up paying more. But that's all right, it's the free market. It's a self adjusting competitive climate. The flourishing market can be rated right up their with your best orgasm.

I have decided to give up on brick and mortar purchases when it comes to the above mentioned goods and services. I will never be shoved into submission by the bully on the block, and I will never give in to the Milton Friedman philosophy. He once said, "Concentrated power is not rendered harmless by the good intentions of those who create it." Well, we've concentrated power, Best Buy, the banks that are to large to fail, now what?

How about the arts? Wisconsin State Journal:

The Madison Repertory Theatre has officially closed its doors. "We are not going to be producing theater again," said artistic director Trevin Gay. Friday was his last day on the job. The Rep first announced dire financial trouble at the end of January. It canceled the remainder of its season — without issuing refunds to season ticket holders — and did not renew space in the Overture Center’s Playhouse. The (Rep) has been around for 40 years.

And newspapers? This Wisconsin State Journal Cartoon Said it all: 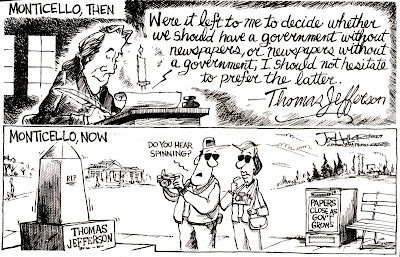 The Republican/conservative world vision has taken down the their enemies one by one. Newspapers, competition, unions, public schools and college funding, corporate regulations and dissenting viewpoints from a more diverse media ownership.

Next thing you'll know they will be telling us the founding fathers didn't really want a federal government at all.