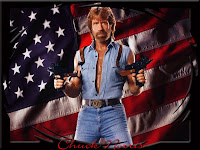 While the country watches, Glenn Beck and Chuck Norris expose themselves as insurgent anti-Americans, the angry leaders of a group of conservative whiners who back an armed revolution against their elected government. This is country first?

Here’s a partial transcript of a recent Glenn Beck show with Chuck Norris.

GLENN: Americans will, they just, they won't stand for it. There will be parts of the country that will rise up. And they said, where's that going to come from? And I said Texas, it's going to come from Texas. Do you agree with that, Chuck, or not?
NORRIS: Oh, yeah. You know, Texas is a republic, you know. We could actually --
GLENN: It was a country before it was a state.
NORRIS: Yeah, we could break off from the union if we wanted to.
GLENN: You do, you call me.
NORRIS: Oh, yeah.
GLENN: Seriously, you do. I don't mind having that lone star on my flag.


Now that’s “My country, right or wrong.” Beck would leave this country in a heart beat. And that’s just 50 days into the Obama administration. Let me see...liberals put up with eight years of Bush, conservatives can only handle 50 days of Obama. Wow, they are patriots. Maybe they should stick around and rise up against their own government, like one of those radical religiously driven insurgencies.

Chuck Norris with his column on World Net Daily who says in not such unsubtle language that it may soon be time for a violent uprising:

"On Glenn Beck's radio show last week, I quipped in response to our wayward federal government, "I may run for president of Texas." That need may be a reality sooner than we think. If not me, someone someday may again be running for president of the Lone Star state, if the state of the union continues to turn into the enemy of the state...How much more will Americans take? When will enough be enough? And, when that time comes, will our leaders finally listen or will history need to record a second American Revolution?"

Personally, I would love to see Texas become the first great libertarian experiment where an entire country is ruled by unchecked corporate power. The only problem: They would be our neighbors.