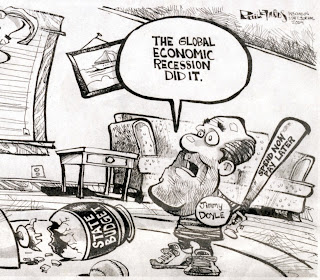 Republicans in Wisconsin are trying to pretend the recession was caused by their dearly beloved Democratic governor, Jim Doyle. It's his fault for the projected deficit, and proves that the state spends way to much of our hard earned taxpayer money on wasteful government spending.

The cartoon on the right lays the entire blame of the global economy...I mean state economy, on Doyle's baseball bat of "spend now pay later." Boy, it's just like a Democrat to blame everything on the GLOBAL ECONOMIC RECESSION.

Oddly enough, it appears that OTHER states have similar budget deficit problems, coincidentally at the same time Doyle tanked Wisconsin's economy. I ran across the following graphic in the latest AARP Bulletin, using figures from the Center on Budget and Policy Priorities-Feb. 10, 2009. 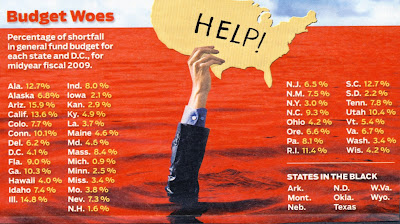