Saving the Newspapers with E-Readers 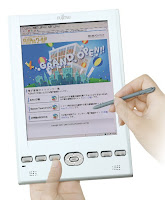 Well, I guess I shouldn’t be that surprised. With the loss of so many local newspapers across America, I came up with an idea to save all of them, using the newest technology available. Download them to E-readers, like the Kindle 2.

Online papers were now a part of the electronic media, delivered via my cable line. Cable TV utilizes a digital box or a DVR to deliver in the information. Like those devices, the Kindle 2 and other book readers would allow subscribers to get their newspapers downloaded wirelessly every day. A partnership with reader manufacturers would allow subscribers to rent the reader from the news outlet for a small fee per month along with a small service fee for the news service. It would offer the local newspaper along with “packaged” national papers and magazines as well. This would not only benefit online papers, but the daily "paper" versions as well, moving them into the future.
As bad luck would have it, my dreams of being a multi-billionaire have been dashed.

Editorandpublisher.com: The Detroit Media Partnership (DMP) is testing the waters of digitally distributing two Detroit dailies with an electronic reader. The company, which at the end of this month is cutting home delivery of The Detroit News and the Detroit Free Press to three days a week, is working with Plastic Logic. The plan is for readers to rent the digital devices from DMP, according to Newspapers & Technology. Currently the Detroit Partnership is testing 100 of the Plastic Logic devices for distribution. Much of the details like pricing and availability have yet to be finalized, N&T reported.

Physorg.com: US publishing group Hearst Corp. plans to launch a wireless electronic reader for magazines and newspapers similar to Amazon's Kindle for books. "What Hearst and its partners plan to do is sell the e-readers to publishers and to take a cut of the revenue derived from selling magazines and newspapers on these devices," Fortune Magazine said. The Hearst e-reader has a large-format screen "suited to the reading and advertising requirements of newspapers and magazines." It said the device "will approximate the size of a standard sheet of paper, rather than the six-inch (15-centimeter) diagonal screen found on Kindle. Given the evolving state of the technology, the Hearst reader is likely to debut in black and white and later transition to high-resolution color with the option for video," Fortune said.

Cnet.com: Fujitsu gets set to release its Flepia color e-book reader in Japan with a $1,000 price tag. In the works for several years, the Flepia has a bigger display than does Amazon's Kindle 2--it has an 8-inch 1,024x768-pixel XGA touch screen that can display 260,000 colors (Fujitsu refers to its e-ink technology as "color e-paper"). The unit also has built-in wireless Bluetooth and Wi-Fi options, an SD card slot capable of holding up to 4GB of storage, and a battery that, according to Fujitsu, is rated at 40 hours of continuous use (we assume that using Wi-Fi would drain it quicker, however). You link your cell phone to the e-book via Bluetooth to access an online e-book store and a Web browser.

Plastic Logic revealed the first partners to distribute content on its eReader when the device becomes commercially available sometime in 2010. The eReader is about the size of an 8.5 inch by 11 inch pad of paper and weighs less than most print magazines, according to Plastic Logic. It's made with plastic, not glass, meaning that it is designed to be strong and to be able to stand up to being hit with objects or, presumably, even dropped. Furthermore, the eReader is an open platform that allows content creators to offer their digital content in their own way
Posted by John Peterson, Democurmudgeon at 3/18/2009 03:47:00 PM