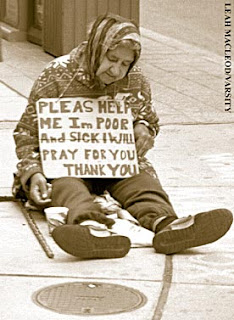 The following short reality check reported in the Kansas City Star pointed out the draconian disciplinary system meted out by the party of authority, Republicans. You’ll notice health care is being kept from lower and middle income families for no other purpose than to appease an intangible ideological position. The arguments to cover these families are neither unreasonable or wasteful, in one case at no additional cost to taxpayers, but never the less resisted by state Republicans as the ultimate punishment for being a drag on society.

That’s over 60,000 more people receiving coverage, for a “total cost to the state: about $35 million.” In a budget dealing with billions, it appears to be a small cost for such a large number of uncovered people. If that wasn’t mean spirited enough, state Republicans blocked:

“(the expansion of) Medicaid coverage to 35,000 low-income adults in an arrangement with the Missouri Hospital Association. The move would cost state government nothing … the House Budget Committee, controlled by Republicans, said no.”

Of course, I could go on one of my usual rants here, but instead I’ll defer this time to the reasoned, logical and caring point by point rebuttals from the outraged state Democrats.

House Minority Leader Paul LeVota said: “It is ridiculous that the Republicans would not use our Federal money to help the people of Missouri during this economic downturn. They care more about their political ideology than the people of Missouri.” Holsman: “The issue of uncompensated care is so drastic that hospitals are willing to provide coverage for an additional 35,000 people with no tax increase. The Republicans just don’t get it. We pay for this care. The choice is rather we pay for it in the doctor's office or in the ER.”

Stephen Bough, the Jackson County Democratic chairman: “Simply put, the Republicans in the House are doing everything to ensure that poor children don’t get the same health care that the State of Missouri provides to the children of elected representatives. Even when the federal government will pay for it, like the SCHIP program, the Republicans toss it aside with a school yard argument like socialism. Taking care of poor, sick children is not socialism, it is a moral obligation.”

Blah blah blah! Am I right conservatives? Socialism. Of course it would be unfair not to include the Republican response, by someone less swayed by humanitarian concern for the plight of those who need help:

Submitted by craig: “When they can clean up their own party, then they may have an opinion that is worth a crap. Until then, they need a big warm glass of ‘shut the hell up’.”