The Gift of Capitalism: "A Different Standard of Living, and How Much Lower"-CNBC's Erin Burnett 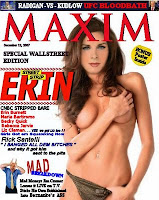 Every once in awhile, someone says something so completely honest, that I have to post it here for everyone to see. Not the Maxim cover pic of CNBC's Erin Burnett, but her closing comment this last week on Meet the Press.

It's amazing how so many have bought into the free market fantasy (I'm talking to you, Democrats). Even after our total economic collapse, a collapse described by Republicans as a market adjustment, we all have to get used to a different standard of living. A lower one.

Erin Burnett: "It's a complete reset...we had expectations that we were gonna have three cars in every driveway. We're probably not going to have three cars in the driveway, we might have two cars, might even have one. There's going to be a different standard of living, and how much LOWER will that be than where we were a year ago."