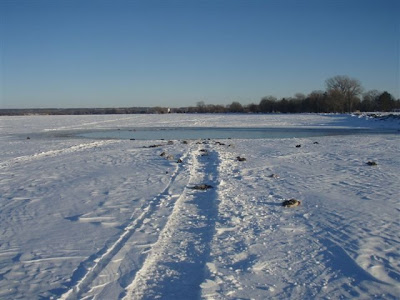 Snowmobilers deaths are up in Wisconsin, and careless speeds and driving have been bamed for the uptick, but recently, the ugly side of the human condition is starting to take its toll on wildlife. The following is almost unexplainable.

Jsonlin: Authorities are searching for a snowmobiler who apparently ran over and killed 57 mallard ducks Tuesday on the Fond du Lac River, just days after five deer were killed when snowmobilers herded them together and ran them over Friday night in Waupaca County. Tracks in the snow show that the snowmobiler skipped over the open water, turned around and skipped over the water again, Protogere said. Bill Schumann, president of the Association of Wisconsin Snowmobile Clubs. "It's disgusting. I don't know what's going on out there, what people are thinking.
There's something drastic going wrong here. This is not what snowmobiling is all
about." Members of the Fond du Lac County Snowmobile Association said they
are outraged by the deer and duck killings. The person who killed the ducks "was
on a snowmobile, but that's not a snowmobiler. That's an idiot," said Randall
Brown, an association member. "A snowmobiler, same as a sportsman, does not do stuff like that."

Authorities have in costudy in the deer killings, Nicholas D. Hermes, 22, of Weyauwega, and brothers Robby D. Kuenzi, 23, and Rory A. Kuenzi, 24, also of Weyauwega. They had not been charged yet. According to the criminal complaint against Hermes, he and the Kuenzi brothers, one of whom was on a stolen snowmobile, drove into a herd of 30 to 40 deer in the field after Hermes accidentally struck one deer on a nearby snowmobile trail.

One deer was apparently dragged and strapped by the neck to a tree, where it was run over and apparently died trying to free itself. Investigators think one deer was placed under a snowmobile and eviscerated by the machine's track.

Keep this story in mind when you consider the debate about snowmobiles in Yellowstone Park. The Bush administration environmental policy in our pristine national parks, currently, goes something like this;

Jackson Hole Daily: After a federal judge tossed the National Park Service’s plan to permanently allow 540 snowmobiles per day in Yellowstone, park officials had been working on temporary regulations to allow 318 machines per day. But about a month before the winter season was to start, another federal judge ruled Yellowstone could revert back to an earlier rule that allowed 720 a day, and the park decided to go with that number.

Bush planned to change the status quo back in December of 2003, but:

NY Times: A federal courtroom Judge Emmet Sullivan declared a halt to the Bush administration's plan to continue and indeed expand snowmobiling in Yellowstone and Grand Teton National Parks. His ruling, which reinstates a Clinton-administration plan to phase out the snowmobiles, is a victory for the parks, their wildlife and the visitors who come to enjoy both. Beyond that, it is a resounding rebuke to the Bush administration, whose eagerness to satisfy a narrow political constituency caused it to violate its statutory obligation to protect the parks from degradation and to leave them, as the law commands, "unimpaired" for future generations. That snowmobiles impaired the parks was never much in doubt — not to the Park Service employees who hated President Bush's plan; not to the public, whose comments reflected overwhelming disapproval for the plan; and not to the government's own scientists, who concluded that even the newer, quieter snowmobiles the administration had promoted as the ultimate compromise would foul the air and disrupt animal life.

Only two groups could possibly benefit from the Bush approach: the off-road-vehicle enthusiasts who regard any limitation on their use of public lands to be an abridgment of individual freedom, and the snowmobile operators in places like West Yellowstone, Mont., whose businesses would temporarily suffer. The judge's ruling is not the end of this controversy. There will be appeals from snowmobile manufacturers, from the State of Wyoming and possibly from the Bush administration itself. One hopes that Mr. Bush will simply abandon an idea that has caused him nothing but grief.