It may seem hard to believe that as we near another great depression, brought on by lax regulation and supply side economics, that the party responsible for the current crisis is able to sell their snake oil “tax cut” solution again. And the public is starting to believe it. It also highlights the limp way Democratic compromisers failed at every level to passionately stand behind their convictions. When Democrats Included tax cuts in the stimulus, to bring on more Republican support, it legitimized the failed tax cut/trickle down philosophy. It’s shocking to see conservatives winning the debate after destroying our economy and walking away scot free. Want proof:

According to the Rasmussen Report:

In an op-ed, Limbaugh also advocated cutting the corporate tax rate, which economists have said will have a relatively weak stimulative effect. Mark Zandi, chief economist at Moodys.com, predicts that for every dollar federal revenue is reduced by corporate tax cuts, there will be a corresponding increase in GDP of only 30 cents. By contrast, Zandi predicts that for every dollar spent on extending unemployment benefits, there will be a corresponding increase of $1.64 in GDP. 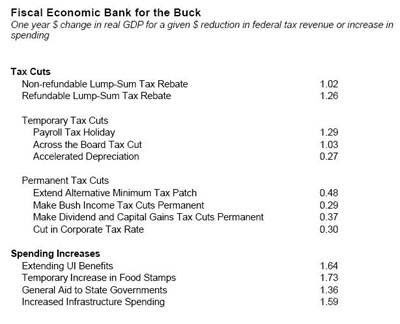 The Center for Budget and Policy Priorities (CBPP) has also reported that corporate tax cuts are "likely ineffective as stimulus." Citing research by the Congressional Research Service (CRS), CBPP stated:

The primary problem employer’s face in a recession is a shortage of demand for their products, not a shortage of cash. When firms face a shortage of demand, they will find it more attractive to retain -- or pass to shareholders -- any new cash they receive from a tax cut, rather than invest in increased production of goods and services for which no customers exist. But passing the tax benefits to shareholders and business owners would not stimulate the economy much. Shareholders and business owners are two groups that tend to have higher incomes -- and thus to save, rather than spend, much of any additional income they receive. As CRS concluded, such a tax cut "is more likely to be spent on reducing debt, or paying out dividends. Both choices would not expand aggregate demand."

My own gut feeling is that President Obama has spent his political capital and lost it, given the minority party elevated importance after seeking their approval, and pretty much put off any possible success he was hoping for in the next four years. That doesn’t even include the possible loss of a veto proof majority before that time.

Has the moment of opportunity just slipped away? Is the Democratic Party in control?