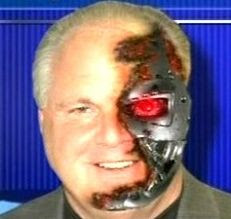 It’s called projection. Thanks to Rush Limbaugh, now I understand the problem.

I understand now why Republicans accused Democrats of secretly hoping Bush would fail. It was an absurd concept, until now. They were projecting. In psychiatry, it’s “a defensive mechanism by which your own traits and emotions are attributed to someone else.” In a rare lucid moment for Rush, he drew the curtain back to expose what is really behind the Republican Party, revealing an emotionally unstable political body about to become even more marginalized.

Rush Limbaugh has been the Republican Parties worst nightmare, spewing the truth behind their politics and self destructive nature. They really want the country to fail, just to achieve their political ends. Limbaugh wants the nation’s recovery plan to fail. He even admits that American’s will like what the Democrats are offering.

But haven’t you heard, the Republicans know what’s best for the country. They’re the ones that want to save the people from themselves. They are rejecting a government by, for and of the people, and offering instead, a government authority who dictates what we really need. Thanks to that off the cuff comment from Pres. Obama, Rush has exposed the conservatives darkness to the light of day.

The National Review asked Rush Limbaugh for his reaction to President Obama’s comment to Republican leaders, "You can't just listen to Rush Limbaugh and get things done."

Obama's plan would buy votes for the Democrat Party, in the same way FDR's New Deal established majority power for 50 years of Democrat rule, and it would also simultaneously seriously damage any hope of future tax cuts. It would allow a majority of American voters to guarantee no taxes for themselves going forward. It would burden the private sector and put the public sector in permanent and firm control of the economy. Put simply, I believe his stimulus is aimed at re-establishing "eternal" power for the Democrat Party rather than stimulating the economy because anyone with a brain knows this is NOT how you stimulate the economy.

Simply put, Rush is worried the American people might like the way the country is run so much, that the empty rhetoric of “tax cuts” will no longer get votes, and the GOP will sink like the rock it has been in blocking our nations progress. Rush continues to cut the conservative wound deeper, this time appealing to the racist nature of the party in a surprisingly open way…

Don't you just hate those uppity, incompetitent affirmative action blacks? Like my conservative friend said in a recent phone call, "Your "boy" is going to be in the White House." He also denies being a racist.
Here is Rush’s ultimate PROJECTION:

I want him to fail. If his agenda is a far-left collectivism -- some people say socialism -- as a conservative heartfelt, deeply, why would I want socialism to succeed?"

Oh, I don’t know, maybe because it might work? Rush just gave the ditto deadenders and general public the twisted justification to want the president to fail in his attempts to save this country, an unthinkable thing to say at a time like this and in this nations short history.

This week, the grand dragon of partisan politics and the former water carrier of the Bush administration, Rush Limbaugh, served up all the Republican secrets and hidden agendas for the world to see.

In fact, you might call it a psychological version of Dorian Gray. A party that gave up everything for the appearance of confidence, free markets and responsibility, while hiding the decay, corruption and age that ended up rotting the party from within.
Posted by John Peterson, Democurmudgeon at 1/25/2009 01:20:00 PM