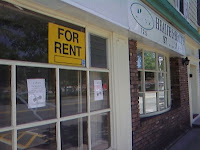 As we start the new year, it's time to take a look around, and admit the obvious: The state and national GOP ideological agenda collapsed under the weight of so many lies and contradictions. Like N.Y. Times columnist Bob Herbert wrote recently:

Mr. Bush traveled the country in the early days of his presidency, promoting his tax cut plans as hugely beneficial to small-business people and families of modest means. This was more deceit. The tax cuts would go overwhelmingly to the very
rich.

Sound familiar? Of course, and you're hearing it more now, as the Republican Party attempts to preserve what most people know has failed. It's not easy coming up with a whole "new" party with the repugnant philosophical leanings as your opponent, while going against your own self destructive social vision of a capitalistic nation.
The simple test: Take a look around you at the ever mounting vacant store fronts, those small businesses that can't wait out the economic depression.
So this is what the free market does to America's main streets, and its effects on the many independent entrepreneurs taking the economic risks that has been the backbone of middle class growth.