The Act 10 Holiday celebrated by Freeloaders.

Act 10's anniversary came and went without anybody noticing because right-wingers didn't want to even try to defend the indefensible. Let's take a look at Act 10's legacy of change.

IT'S A TAX CUT ENTITLEMENT: Scott Walker and his band of gerrymandered legislative plundering pirates have oddly convinced "hard working" conservative voters there really is a "free lunch," it's just that they have packaged it under the name "tax cut."

In Republican fantasy world, there is no such thing as a tax increase, ever. The way they see it, nothing ever gets more expensive, wears out, becomes outdate, or improves via new life changing technologies. The "tax cut entitlement" mindset is their just due, their money, not the governments.

WHEN REPUBLICANS LOVE SOCIALISM: My Trump cultist friend in Milwaukee recently bragged Trump is spending money on the pandemic...uh, that's socialism. All the while Trump is sticking with his mind boggling proposed budget cuts to the CDC, even after all this.

RIGHT WISCONSIN'S "ACT 10 HOLIDAY" or ST. PATTYS DAY MALARKY? The problem is state aid for public schools is still below what was spent 10 years ago. Freeloading Republicans perform clever math. The formula: spending cuts = surplus = tax cut + backfill spending cuts (by saving us from the problem they created). See below: 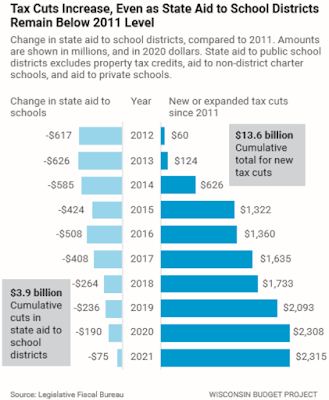 Here's how the McIver Institute see's Wisconsinites exercising their First Amendment right "of the people peaceably to assemble, and to petition the Government for a redress of grievances."


"As far as the government unions were concerned, the budget repair bill was the end of the world – and they acted like it. For a month, they coordinated the occupation of the hallowed halls of the Wisconsin State Capitol by juggling clowns, college potheads, exploited children, out-of-state communists, card-carrying socialist state employees, malingering public school teachers, derelict doctors, and thousands of other protesters."

Let's take a look at what M.D. Kittle wrote in 2018 about what the new kind of "worker freedom" did for state employees (my comments in bold directed at underlined Kittle bullshit):


Time would prove wrong the liberals who used dire predictions about Act 10 to fuel their political recall campaigns (the real point of Act 10, defund Dem political campaigns). The law saved Wisconsin taxpayers more than $5 billion (pulled $5 billion that teachers could spend in their local economies) in its first five years alone. Wisconsin school districts have saved more than $3.2 billion in benefits costs (then saw a cut in state funding by $600 million in 2012), thanks to employee contributions and greater competition in the health insurance marketplace. Wisconsin schools pumped those savings back into education (to make up for funding cuts), rewarding exemplary teachers (bidding wars that drained rural teacher supply giving wealthy districts the advantage), reducing class sizes by hiring additional educators (teacher supply shortage resulting in lower qualifications), and expanding or improving other initiatives and programs (whatever you want to make up here).

Republicans may can take credit for tax cuts, but they'll never bring up the hike in taxes by most local governments around the state. This is dishonest reelection material only.

With school test score down now, rural schools closing and losing teachers, endless but very necessary referendums, and union apprenticeship programs hurt by the "right-to-work" law, you'll notice who won the battle in Wisconsin according to Kittle.


"Thank you Scott Walker for having the courage to stand up to the status quo and Big Labor."