Evolutionary Theory "Survival of the Fittest," broken! Still too many Republicans.

From what I've seen, including what my Trump cultist friend in Milwaukee keeps texting me, nothing has changed
Strong Survival Instinct: Democrats demonstrated a rational fear of the Covid-19 pandemic.
Weakest Survival Instinct: Republicans chose denial, risk, cultist feelings for Trump, and low information.
So with the above information in mind, how is it so many Republicans have survived this long?

1. Knowledge is Power: 48 percent of Democrats said they were following the coronavirus news very closely; only 32 percent of Republicans said the same.

2. Heeding Warning Signs: 29 percent of Democrats said the threat is exaggerated; among Republicans, that number was 58 percent.

3. Survival Instinct: 74 percent of Democrats said they are worried about the virus; only 45 percent of Republicans agreed.

4. What you don't know can't hurt you: 58 percent of Democrats predicted coronavirus would spread to the entire country; only 28 percent of Republicans agreed.

5A. Science: Most Democrats echoed the authorities in saying that the U.S. death toll would top 1,000 fatalities (55 percent) and that no vaccine would be available this year (61 percent).

5B. Blissful Ignorance: Most Republicans said the opposite, with 66 percent predicting fewer than 1,000 fatalities and 57 percent saying a vaccine would arrive in 2020.

So what's the scientific theory behind "dumb luck?"

Wait for it...Trump wants More Cuts to CDC and Pandemic Response: Behind every tax cut, is this, a spending cut. Eyes opened yet? 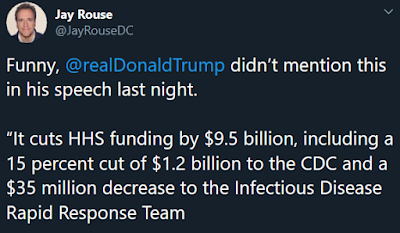 Russ Vought, the acting director of the White House Office of Management and Budget, on Tuesday doubled down on proposed cuts to health services and the Centers for Disease Control and Prevention (CDC) in President Trump’s 2021 budget request. , despite the coronavirus outbreak.

Under intense questioning from Rep. Matt Cartwright (D-Pa.) about … cutting Health and Human Services funding by $9.5 billion, including a 15 percent cut of $1.2 billion to the CDC and a $35 million decrease to the Infectious Diseases Rapid Response Reserve Fund's annual contribution.