GOP said Covid-19 was used to “bludgeon Trump with this new hoax.” Reality exposes US need for Universal Health Care!!!

The two health care points the public isn't hearing enough about, and might be considered "fear mongering" by some...


1. The exposed deadly problem of not having universal health insurance when it comes to epidemic and pandemic disease threats.

2. And the Supreme Court deciding the ACA is unconstitutional. Consider the irrational panic Americans are feeling right now about moving to Medicare4All, and the horror of losing their current insurance policy which unfairly limits your choices, the network your in, the covered treatments, prices you pay and requires copays and deductibles. The latter might be what we'll end up with:


If the Supreme Court rules the ACA unconstitutional, it will substantially disrupt the U.S. health system and could eliminate insurance coverage for millions of Americans.

The Biden Effect: Joe Biden plans to add a Medicare4All option into the ACA Marketplace, the worst possible negotiating starting position. An ACA repeal by the Supreme Court would make it so easy to convince everybody to adopt Medicare4All, but Biden thinks that's too radical.

Democratic Fail...Again! Covid19 screams Universal Health Care: How hard would it be or how obvious do things have to get before Democrats notice? At least it's starting to get noticed, but at what cost to Americans abandoned by their government. You'll notice below how AHIP, the insurance lobby, wants us to know nothing will get in the way of making a profit...brutal: 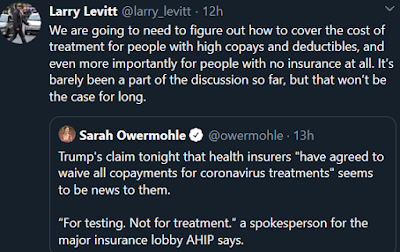 And one of Trump's earliest and most irresponsible deadly way to save taxpayer money? Hey, government was just getting in the way huh?:

Here's what happens when a president eliminates the pandemic response team in a country already without universal health care. Check out his thread:

Republicans are never concerned about the counties real and festering problems, but instead stay on message like Scott Walker. Charlie Pierce reminds us just how bad some of these ideas really are: 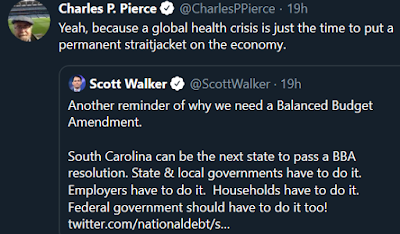 Trump's creative sharpie might just make another appearance after getting so many things wrong in his 10 minute message to the country the other night: 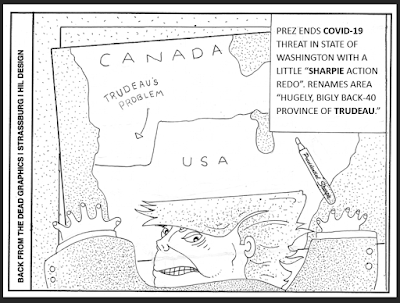 
GOP leaders said they would oppose the plan over the paid leave plan and changes to Medicaid, which would help hospitals cover swelling costs of uninsured patients.

The Democrats’ package would shore up safety net programs like food assistance, unemployment insurance and temporary sick leave with growing numbers of people forced to stay home from work and schools. It would also make free coronavirus testing widely available in a bid to address one of the nation's major struggles in containing the outbreak.

So, Republicans called a "recess" during Covid-19 Pandemic...really? Not in a hurry...: 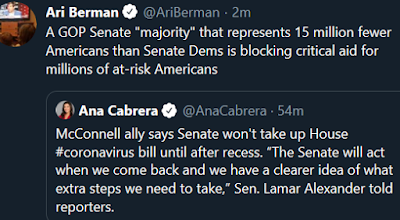 Paid Sick leave no brainer snuffed out at the grass roots level: It's a corporate decision. For example,

In 2008, voters in Milwaukee approved a paid sick leave measure with support from nearly 70 percent of voters, making the city the third in the country, behind San Francisco and Washington, D.C., to approve one. But in 2011, newly elected Republican Gov. Scott Walker and the GOP-led Legislature reversed the Milwaukee measure and approved a law to preempt other Wisconsin cities from following its lead. The Milwaukee law required businesses with at least 10 employees to let workers in the city of Milwaukee accrue at least nine days of paid sick leave a year. Companies with fewer workers must provide at least five paid sick days.

The push for so-called preemption laws is backed by the Koch brothers and the American Legislative Exchange Council, a membership organization of state legislators who favor limited government.

NO HURRY REPUBLICANS: This really happened this week: Get government out of the way?

NO HURRY REPUBLICANS: Like the Covid-19 "recess," here's another "Republicans don't care, not in a hurry" example, when Wisconsin Governor Evers tried to help conservative rural farmers and towns from flooding...

If flooding strikes the state hard this spring he could attack Republicans for not doing enough to stop it...Assembly Speaker Robin Vos, R-Rochester, said in an email to The Associated Press that the chamber’s floor session is over but that Vos might consider the bills next session starting in Jan. 2021 if legislators from both parties can work together on them.

STUDY: The Affordable Care Act now..."the first of two health policy reports for the New England Journal of Medicine, by the Commonwealth Fund":

1. By 2016, people without health insurance had decreased to a low of 28.6 million but has since ticked up.

3. Enrollment through ACA accounted for nearly half of insurance coverage gains, helped by premium assistance.

4. The dependents under age 26 provision decrease the percentage of young adults who are uninsured.

5. Medicaid expansion, subsidies and reforms, cost the government $128 billion in 2019 — considerably less than the $172 originally projected.

6. Medicaid expansion - a reductions in deaths from cardiovascular-related causes among middle-aged adults and deaths from end-stage renal disease.

7. The law’s effects are difficult to discern given the complexity of our health system.

8. Partisan conflict has stymied subsequent efforts by Congress to make improvements to the ACA.  Efforts to roll back key provisions of the ACA or invalidate it are taking a toll.