Trump Republicans decide to save economy, give Americans 15 days to live.

Trump is calling it, and I'm not kidding, the 15 Day Challenge?

Being in uncharted territory just won't cut it anymore: Republicans are gritting their teeth watching the economy crumble just so Democrats can save a few American lives. They've now reached their limit, especially in Wisconsin:

…but then Evers did this...


Vos, R-Rochester, criticized how Gov. Tony Evers, a Democrat, announced his "Stay at Home" order Monday. “The governor’s announcement has created mass amounts of confusion. The governor’s executive order came as a surprise to the Legislature. The people of Wisconsin deserve clear communications during a public health emergency."

Actually everybody else knew this was being planned. Vos still hasn't waived the one week wait for unemployment. Too confusing?

It didn't take long for this idea to catch on nationally, starting with this signal from Trump, and his "15 Day Challenge":

President Trump is signaling interest in scaling back “social distancing” and other steps promoted by health officials to contain the novel coronavirus as a growing number of conservatives argue that impact on the U.S. economy has become too severe. The 15-day period is set to end on March 30.

The lineup of big corporate sellouts have also chimed in. Note; the article states Stephen Moore is an economist-he isn't really, but plays one:


The push to reopen parts of the economy has gained traction among Republican lawmakers, including Sens. Ron Johnson (R-Wis.), conservative economists Steven Moore and Art Laffer (who) have been lobbying the White House to strongly consider scaling back the recommendation that restaurants, stores and other gathering spots be closed.

Moore: "You can’t have a policy that says we’re going to save every human life at any cost, no matter how many trillion of dollars you’re talking about.” Leading Wall Street and conservative media figures have also embraced the idea.

Larry Kudlow said on Fox News on Monday. “The president is right. The cure can’t be worse than the disease. And we’re going to have to make some difficult trade-offs.”

Warnings that the “fear of the virus cannot collapse our economy” and complaints that ordinary citizens are under “house arrest” at a time when officials are considering releasing nonviolent elderly criminals..."

I'm hoping every Republican sacrifices themselves for me, as a rugged individual would do for the economy...please, please lead by example!!! Better dead than in the red? 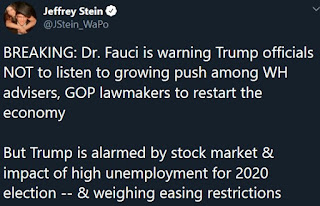 Wisconsin Rollback? "Making some Difficult Trade-offs," where "You can’t have a policy that says we’re going to save every human life at any cost,: If Trump scaled back closures at the end of March -  COVIDACTNOW: 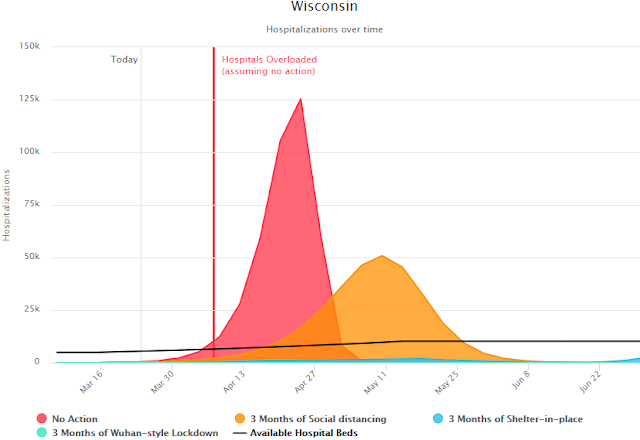 "The consequences felt by citizens and small businesses around the state has already been tremendous … the people we serve need the jobs they have today to help weather this storm. Continued economic activity will not only help us in our fight against this virus today, it will also ensure that we don't have to fight to recover from economic collapse tomorrow.”

Brave Talk Radio Hosts: The right-wing propaganda machine went further, fear mongering the imagined loss of "freedom," the government intrusion by dictator Gov. Evers, and the lunacy that the "seizure of power by government (during a pandemic) is more serious than the virus:

…and Vicki McKenna agrees. What a rebel: 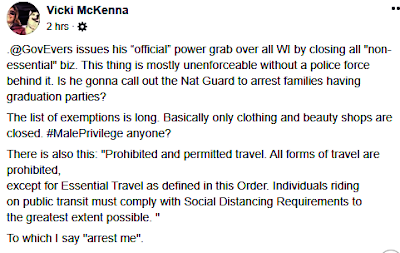 Scott Walker always believed people's value came from working. That's why he took food and health care away from those who didn't work. No value.

Still, Trump can try opening businesses again, but who's going to show up?