Disaster capitalism, "taking advantage of a major disaster," is now playing out thanks to the COVID-19 pandemic: And Trump is leading the charge.

The move has tapped into a broader fear … that the president will use a moment of crisis to push for controversial policy changes. Already, he has cited the pandemic as a reason for heightening border restrictions and restricting asylum claims. He has also pushed for further tax cuts as the economy withers, arguing that it would soften the financial blow to Americans. And even without policy changes, Trump has vast emergency powers that he could legally deploy right now to try and slow the coronavirus outbreak.

Trump's China Conspiracy Theory: The Trump Cultist base will Believe anything, so devour this: 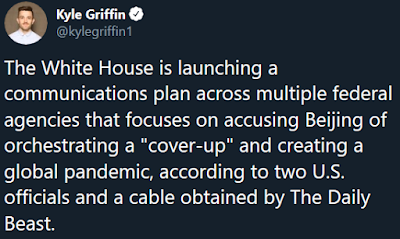 It also issues guidelines for how U.S. officials should answer questions on, or speak about, the coronavirus and the White House’s response in relation to China. One section of the cable reads “NSC Top Lines: [People’s Republic of China] Propaganda and Disinformation on the Wuhan Virus Pandemic.” “Chinese Communist Party officials in Wuhan and Beijing had a special responsibility to inform the Chinese people and the world of the threat, since they were the first to learn of it. Over the last several weeks top administration officials, including President Trump and Secretary of State Mike Pompeo have referred to the coronavirus as both the “Chinese virus” and the “Wuhan virus.”

Here's something that might appear eerily similar to the Trump response:

Instead, the... (China) government hid news of the virus from its own people for weeks, while suppressing information and punishing doctors and journalists who raised the alarm. The Party cared more about its reputation than its own people’s suffering.”

None of this Needed to Happen: The Trump administration is busy spreading fear, suspicion, resentment, and creating conspiracy theories you would not have thought possible, to his panting and easily convinced voter base.

Had Trump kept in place pandemic prevention measures, and listened to government warnings, the severity of all this would not be the economy collapsing mess it is today:

Dr. Ashish Jha, a physician and the director of the Harvard Global Health Institute, who has been tracking the coronavirus story closely over the past couple months:


“Oh, my God, if we had got on top of this thing two months ago, America would look very, very different. So, let’s walk through that scenario. Imagine that when the W.H.O. put out its test kit [in January] we either took it or built an effective test ourselves. We would have then ramped up those tests. The data by late January was very clear that we were going to see a lot of these infections in the United States, and, actually, we had started seeing the first cases from travellers from China. We would have started testing people who had symptoms. Initially, it was the travellers, because that is how it got introduced. We would have isolated those people. We would have had contact tracing, which is really critical. Everyone that had been in touch with them would have been monitored, and any of them that showed symptoms would have been tested. If we had done that extensively across the United States, I believe we would have got on top of this infection.”