Republicans, you have failed Wisconsin! The List just keep growing...

The Covid-19 pandemic is the system shock exposing every wrong Republican policy bragged about for the last 20 years. Wisconsin's Scott Walker was a walking/talking checklist of right-wing clichés and truisms. We now have real world proof our gerrymanders Republican overlords were wrong about almost everything. Let's take a look.

First, shouldn't we start by determining the actual minimum cost to run state government, build in cost of living increases per year, and then spend surplus revenue (profit) on improvements and debt before ever cutting taxes. Not paying for health care, transportation, state parks, clean water, and education doesn't actually save money as we're finding out. Note: Democrats opposed every failure below, and they're the extreme party?

It Starts with Tax Cut Madness: Returning money back to overtaxed Wisconsinites, saying it's their money and not the governments sounded so ridiculous and resentful. Below I've listed the most recent examples of backfilling their failed policy. First, Rep. Robin Vos with the same logic that W. Bush used to take tax surplus dollars that would have balanced the US budget 15 years ago, and the reason he kinda "won" (close/supreme court):


Republicans approved part of Evers’ plan for restoring tax support to state parks. Republicans withdrew tax funding for parks in 2015 and began increasing fees … but some maintenance needs have gone unmet and low employee pay rates have made it tough for the state to adequately staff certain popular parks … approved a $1.2 million increase for park staffing and operations, about $700,000 less than what Evers requested.

2.  CUT UW SURPLUS/NO STATE FUNDING TO BACKFILL TUITION FREEZE: They must think running state colleges is magical. What now after the pandemic?

Plus, No estimate for the collective financial loss of its 26 campuses, some of which were grappling with multimillion-dollar deficits before the coronavirus even emerged.
Republican lawmakers vowed to freeze UW System tuition, seizing on a report that shows the system has amassed a huge $414 million surplus of tuition dollars … only about $82 million isn’t committed to a specific purpose … citing dwindling state aid and the need to recruit and retain top-tier faculty with competitive compensation packages.

3. PAID SICK LEAVE REPEALED STATEWIDE: Big government Republicans didn't like Milwaukee's voter approved sick leave benefit, so they passed a one-size-fits-all ban statewide. The COVID-19 pandemic exposed why that was a bad decision and why other countries have paid sick leave:


Level of Compensation Required for Paid Sick Leave. Covered employers are required to pay every employee who takes emergency paid sick leave at a rate of compensation no less than the employee’s “regular rate” of pay (as that term is defined under the Fair Labor Standards Act.

4. OPPOSITION TO UNIVERSAL HEALTH CARE/MEDICARE FOR ALL: With over 26 million uninsured still, and at twice the cost of other nations, there's nothing "fiscally conservative" or morally justifiable for not having universal health care, as recently documented here... 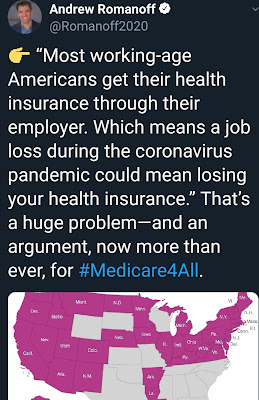 5. TAX CUTS, IMAGINE THE PAINFUL SPOT WE'D BE IN NOW: From an earlier post:

Democratic Gov. Tony Evers vetoed a major $250 million Republican-led tax-cut package that would have used unanticipated revenues to reduce the average taxpayer’s income tax bill by $106. The veto came one year and a week after Evers' first veto, which was of a similar income tax cut passed by Republicans.

Eh, Sen. Scott Fitzgerald plays down what was always a Bad Idea: The COVID-19 outbreak exposed the GOP again, but did they notice? Nope. Republicans don't govern, they simply pass ideologically driven ideas, devoid of any real world connection to the consequences of their actions.


Another question is how much the coronavirus, paired with a national economic slowdown, could affect the state budget — A recession would likely erase the surplus.

“That’s definitely on our minds,” Republican Sen. Scott Fitzgerald said. “Hindsight is 20-20, but that projection could change dramatically, and as a result of that, things could be a lot tighter than where we thought they were.”

6. NO RURAL BROADBAND URGENCY: With closed schools now online, guess what, no internet or deathly slow. 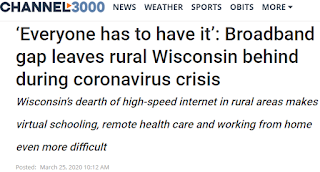 Already, Wisconsin lags behind the national average in broadband coverage. An estimated 43% of Wisconsin’s rural residents lack access to high-speed internet, compared to about 31% of rural residents nationwide, according to the Public Service Commission of Wisconsin. “We have such a long ways to go,” said state Sen. Jeff Smith, a Democrat who has tried unsuccessfully to increase the state’s investment in broadband.

From an earlier blog post: It all started when Walker turned down $23 million in stimulus money to expand broadband everywhere in the state. Like the Journal Sentinel wrote in this Feb. 18, 2011 editorial:

The state is turning down $23 million because state taxpayers would have been on the hook for the entire amount if the state could not meet the grant's precise requirements, Mike Huebsch, secretary of the state Department of Administration, said in a memo to school and library associations. "This is simply not an acceptable risk," Huebsch wrote.

Actually, it is. High-speed Internet is part of the necessary infrastructure that is vital to communities that want to grow. The state will get there anyway, but this money could have speeded up the journey.

7. PANDEMIC FORCES GOP TO ELIMINATE PUNISHING UNEMPLOYMENT WAITING PERIOD: Well, we could have saved a lot of time and a lot of jobless pain if this bad idea never made it into law. Guess Vos/Fitzgerald were wrong again:

Under current law, workers do not receive unemployment benefits for their first week of unemployment, effectively denying them one week of benefits. Lawmakers support eliminating the waiting period for at least the rest of the year.

Evers has been pushing for the elimination of the one-week waiting period, which he originally included in his 2019-21 state budget request.

8. A BALANCED BUDGET AMENDMENT STRAIGHTJACKET, NOW, DURING A PANDEMIC?: Imagine if the federal government were blocked from spending $2 trillion-$4 trillion during the COVID-19 pandemic. Yet Republicans like Scott Walker are unfazed and undeterred. This is beyond tone deaf, it's sociopathic. Besides, the truth is, TAX CUTS ARE DRIVING DEFICITS.

Believe it or not, Walker tweeted this jaw-dropping demand for a balanced budget amendment...today: 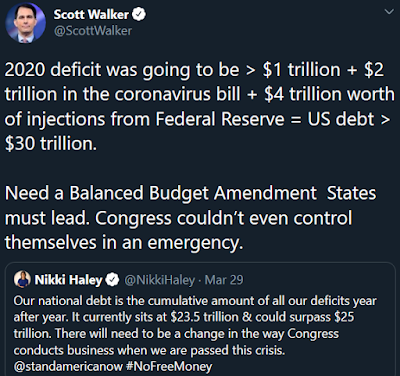 We know Republicans will never increase spending or taxes, heck they didn't want to spend anything to help the COVID-19 affected unemployed. Will some reporter please interview Walker, and get his take the points below. From a previous blog post:


1. Many economists say federal deficit spending can be necessary to fund wars, combat economic recessions or respond to natural disasters.

3. Democratic lawmakers as well as the John Birch Society, a far-right advocacy group say a balanced budget amendment would make it harder for the federal government to respond to economic downturns and natural disasters.

4. EPI: A balanced budget amendment would mandate perverse actions in the face of recessions. In economic downturns, tax revenues fall and some outlays, such as unemployment benefits, rise. These so-called built-in stabilizers increase the deficit but limit declines of after-tax income and purchasing power. To keep the budget balanced every year would aggravate recessions. Unlike many state constitutions, which permit borrowing to finance capital expenditures, the federal budget makes no distinction between capital investments and current outlays. Private businesses and households borrow all the time to finance capital spending.

5. It would prevent federal borrowing to finance expenditures for infrastructure, education, research and development, environmental protection, and other investment vital to the nation's future well being.

6. It would invite Congress to enact unfunded mandates, requiring states, localities, and private businesses to do what it cannot finance itself. It also invites dubious accounting maneuvers (such as selling more public lands and other assets and counting the proceeds as deficit-reducing revenues), and other budgetary gimmicks.

7. Disputes on the meaning of budget balance would likely end up in the courts, resulting in judge-made economic policy. So would disputes about how to balance an unbalanced budget when Congress lacks the votes to inflict painful cuts.

8. An overall spending cap would further limit Congress’s ability to fight recessions. Even during expansions, a binding spending cap could harm economic growth because increases in high-return investments — even those fully paid for with additional revenue — would be deemed unconstitutional if not offset by other spending reductions. A binding spending cap also would mean that emergency spending (for example on natural disasters) would necessitate reductions elsewhere, leading to increased volatility in the funding for non-emergency programs.

9. The budget not only attained balance, but actually recorded surpluses and reduced debt, for four consecutive years … Between 1998 and 2000, President Bill Clinton’s Treasury Department paid off more than $360 billion in debt. As a result of 115 straight months of economic expansion that began after an increase in the top income tax rate — which was virulently opposed by the right — the huge deficits left by 12 years of Republican rule had been transformed into a surplus. Within months after taking office George W. Bush had begun to turn that surplus back into deficits that grew and grew, despite funding two wars on emergency supplemental bills that were not figured into the budget.