Poor victim billionaire President-king Trump, people are blaming him for being utterly unprepared for not just the office, but for his failed coronavirus response:

The New York Times, which obtained a recording of the call, reports that Trump once again falsely claimed that America’s pandemic response system was “broken” under former President Barack Obama, when in reality Trump shuttered the National Security Council’s pandemic response team and never replaced it with anything comparable.

Trump: “We broke down a system that was broken, very badly broken,” Trump said to the governors, and then added that his team is creating a new one that “I think is going to be the talk of the world.”

Protecting Trump: Milwaukee conservatives and radio pundits had a laugh voting in fake "Democrat" Sheriff David Clarke for years, even having him fill in on the air with insights illuminating as his most recent ones below on Twitter.

To Clarke, the rising epidemic and death toll from Covid-19 is a threat to not human life, but to capitalism. This is the same kind of stuff I'm hearing from my Trump cultist friend in Milwaukee. Hey, 80 percent of conservatives can't be wrong about how great Trump is handling this: 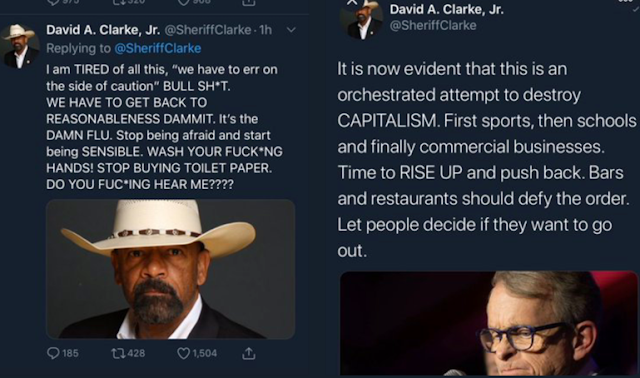 Clarke went on to clarify of course...: 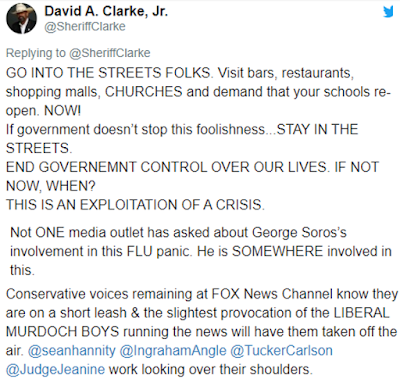 Second Impeachment-like Attempt by Liberals to Destroy Trump: Fox News sent Trish Regan on hiatus after this little rant, saying they were just trying to protect their staff. Right.

Wanna know how Republicans really feel about Democrats, and why it's so frustrating to watch Democrats play nice all the time?


On Monday, March 9, Trish Regan opened her Fox Business show by complaining of the “Coronavirus impeachment scam.” Her deranged monologue received widespread ridicule after a tweet by Media Matters’ Andrew Lawrence that has been viewed millions of times.