How's the U.S.'s private for-profit health care free market handling the sudden demand for services and supplies to treat the coronavirus? Oh come on, if this were Medicare4All, Republicans would be trashing government health care, saying I told you so for failing to keep up with patients and testing. But the infallible free market? Not a peep.

Keep Testing Down, Keeping Infected Numbers Down: While the Trump/Republican echo chamber blame countries with national health care systems for having more people infected, they purposedly fail to mention that those countries are testing massive numbers of citizens. That's why the US has lower numbers. Even infected medical staff can't be tested because they're not part of the targeted group due to a lack of test kits.

Obama-to-Trump Voters are Biggest Idiots: There, I said it. You have no excuses, none. From GQ:


Trump Voters Wanted to Blow up the System. Well, Here We Go. 1. Trump’s decision was apparently made without consulting with America’s European allies, who were blindsided, panicked Americans who surged into European airports, paying as much as $20,000 for a last-minute flight home.

2. If, four years ago, you thought, ‘oh, what’s the difference between a Hillary Clinton and a Donald Trump;

3. You get a president who shuts down the global health security team in the National Security Council so that there’s no one but his son-in-law to advise him when a global pandemic reaches our country’s shores.

4. You get a president who doesn’t care about whether people live or die, he just wants the numbers to look good for him, wants the number of cases down and the numbers on the stock indices up, and the best way to do that is to keep Covid-19 testing and public information at a minimum.

5. You get a president who doesn’t believe in science when it doesn’t suit him and who, as recently as three days ago, declares a virus that had already claimed thousands of lives around the world a “hoax” and “fake news”—or a president that simply focuses, falsely, on how well his administration is responding to the crisis—because the pandemic might hurt the economy and jeopardize his reelection.

6. You get a president who thinks he can do anything, who off-the-cuff announces a rally in Florida, where the governor has suspended all official travel as medical experts advise people practice “social distancing” by avoiding crowds.

7. You get a president whose response to an invisible virus is to blame foreigners.

8. Maybe it's because the Republican Party has been peddling a dystopian anarchistic anti-government pipe dream to them for the last four decades.

9. Now, it turns out, a functioning government is a good thing to have when a global pandemic arrives on your shores. It turns out that maybe reforming an imperfect system is wiser than just taking a sledgehammer to it, better than trashing them in favor of a one-man, megalomaniacal savior, better to have a functioning system than dancing on its rubble while crowing about the death of the “deep state”—or “the political establishment.”

10. To those 63 million Americans, I say this: you wanted to smash the system and you got what you wanted—in spades.

GOP Health Care System, Private Sector Profits: No ones in a hurry yet, says the guy nicknamed the Grim Reaper who took a 3 day weekend and then delayed making any decision on how the federal government will help every American during the Coronavirus outbreak, Mitch McConnell...victim:

And the genius president who never understood how all parts of our economy work together, still bragged about those sugary Wall Street highs...that fell yesterday 12.94 percent: 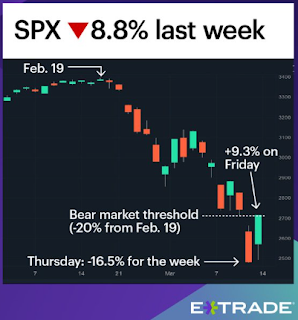 Low-income households (about $14,000 a year) saw their inflation-adjusted incomes rise 2.4 percent...while they grew more than twice as fast, at 5.5 percent, during the last two years of the Obama administration. “This far into an expansion, with unemployment as low as it is, we shouldn’t be seeing incomes for low-income households falling in over a dozen states, and growth slowing down in a dozen more,” says Thea Lee, president of the Economic Policy Institute. “Stock market highs may be great for wealthy households at the top, but they don’t help families at the bottom put food on the table.”


The federal deficit has grown to more than a $1 trillion, and gross domestic product is pretty much right where it was when he took office. Experts say that despite a trade war, tax cuts and more government spending, the Trump economy isn’t all that different from the Obama economy.

Tax Cuts Pay for Themselves Scam: After the Bush tax cuts and the failed Brownback Kansas Comeback, where debt piled up and supply-side economics failed, Republican voters once again celebrated the massive Trump tax cuts that, no surprised, didn't pay for themselves:


"The tax plan will pay for itself with economic growth," Treasury Secretary Steven Mnuchin said. Corporate tax revenues fell 31% in the first year after the cut was passed. Overall tax revenues have declined as a share of the economy in each of the two years since the tax cut took effect.