Biden Republicans don't want government to fix things, all they want is the health care they've got now!!!

Sadly, looks like I've been right. Republicans have successfully sold the idea that settling for what you have now, is all you should get.

Just as shocking, we're now being told what "we don't want?" Republicans have people believing that it's actually radical to have a national health care system, (free) publicly supported K-College, higher minimum wages, paid sick leave, reduced mass shootings through better gun laws, the inevitable move to smart clean energy, job creating rural broadband rollout...etc. You know, that crazy pie in the sky wishful thinking by those who want all the "free" stuff Democrats are promising.

So settling for what you have, or don't have, is so much better? Why let simple progress, innovative ideas, and entrepreneurs wreck what we happily don't have? This cartoon said that best: 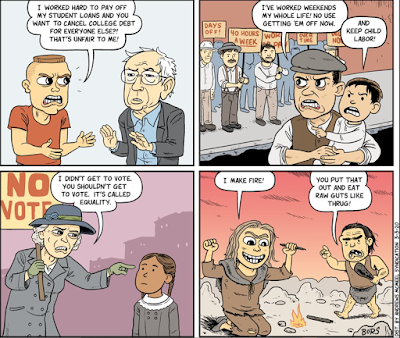 The Washington Post's Greg Sargent confirmed my theory when he quoted Michael Taylor, the Republican mayor of Sterling Heights, Mich., who said the mind-bending logic below.

A few Notes first: Who likes their health insurance premiums and deductibles? With every item below supported by every taxpaying American for a lot less than paying for this stuff individually, why not have government make our lives better by letting us spend time on ourselves, our jobs, and with our families?


Taylor: "Sanders’s message is that you’re getting screwed by the billionaire class and the elites, and we’re going to have a government that fixes that.

I think people say, “I want the health care I’ve got, I want to go to work, I want to make more money, and I want to be able to afford these things on my own, not with help from the government.”