Are there any other adults in the room embarrassed by the constant bitching by Wisconsin Republicans for their own self imposed irrelevance and victimhood after taking the rest of the year off during a pandemic?

These elite authoritarians, after taking the rest of the year off, were exposed for their gut wrenching double standard:

The pathetic whining emanating from the Capitol by the gerrymandered Republican Party elite, who have never outgrown the resentment they had for parental limitations, should be embarrassing enough during a pandemic. Yet they've found another way to wallow in their victimhood.

Vos is now framing an argument to make the governor completely irrelevant.

They (Fitzgerald and Vos) also made clear … "Fundamentally I think that our entire republic is based on the concept of three co-equal branches (of government) and we have temporarily loaned the ability to (the governor) make decisions without the same due process … (they) signaled they would not have limitless patience.


Not letting Evers get all the credit, Vos/Fitzgerald said in their own words all the reasons Gov. Evers gave for his stay-at-home policy, yet questioned if Evers knows that "we should not tolerate this for no good reason"....uh, the deadly pandemic guys. They're so smart:

…they raised concerns about the prospect of forcing businesses to close and limiting people's movement for an extended period. "We should not tolerate this for no good reason and we certainly should not tolerate it for a long period of time unless it’s in the public’s best interest," Fitzgerald said.

Under state law, Evers can declare a health emergency for up to 60 days. The emergency declaration can continue after that only if lawmakers sign off on it. Evers declared the emergency on March 12 and his expanded powers can continue under that order until mid-May. 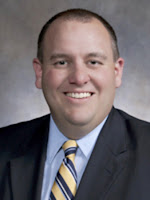 Sen. David Craig of Big Bend introduced legislation this week that would require Evers to get legislative approval before issuing such edicts … (like a) statewide order to stay home to prevent infectious diseases from spreading. . Craig wrote:

"The Executive Branch does not have unchecked authority in such a crisis. To impair fundamental rights — as gathering bans, etc. do — the government must have a compelling state interest to do so AND must do so in a narrowly-tailored and least restrictive means possible under the constitution."

Remember, they're doing this during a deadly pandemic, still predicted to become much worse!!!

Evers would be required to provide lawmakers with a report detailing reasons that justify issuing a ban on large gatherings and a report on arrests made for violating such bans.

POWR GRAB AGAIN PT 3: Republicans setup a "legislate from the bench" arm of their power structure, hiring Wisconsin Institute of Law and Liberty (WILL) to take all cases to the conservative activist State Supreme Court. Again, we have a national COVID-19 pandemic with people dying: 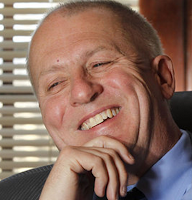 WILL published a legal analysis that argued Evers' emergency powers could face constitutional challenges, particularly if the pandemic persists for a long time. Strong arguments could be made that Evers' actions violate the rights to free speech, due process, peaceably assemble and worship as one chooses, wrote WILL's president, Rick Esenberg. Evers' orders shutting businesses could also be construed as unconstitutionally taking something of value without fair compensation, he argued.

Feeling left out and powerless, Vos will not give up his "arm-chair-governorship," and using the pandemic makes sense:

Vos said he hoped the emergency would last less than 60 days. Lawmakers will evaluate the situation if Evers believes it should continue after that. "Once we get past that 60 days we have to see a very clear-cut reason" to continue it, Vos said. Evers has pushed Republicans to waive a one-week waiting period for people to access unemployment benefits. Vos said Republicans were considering doing that temporarily. “The longer this order goes, the more businesses are never going to have a chance to reopen,” said Vos, who owns a popcorn business. 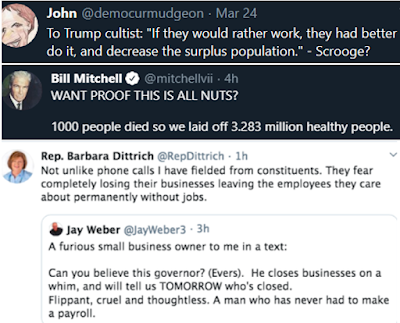 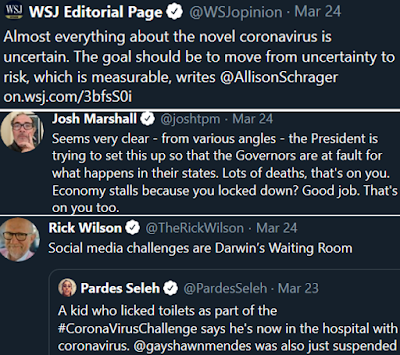