Trump's "back to work by Easter" thing cultists loved, never mind! Betrayed and left holding the bag, Trumpsters now back plan to wait!

Here's Trump's wildly irresponsible "evolution" on getting our nation back-to-work...against the invisible enemy.

Conspiracy Against Trump's Reelection: Don't take my word for it...

Exposing the Cruel Intentions of Freedom and Liberty: The Trump cult immediately jumped on board, exposing the "family values" lie; a bizarre willingness to sacrifice themselves for Trump; blind allegiance to "late stage capitalism" (the hypocrisy and absurdities of capitalism as it digs its own grave); and an unquestioning "whichever way the Trump wind blows" support for utter and sometimes dangerous nonsense.


Ron Johnson: “Each year, approximately 48,000 Americans commit suicide and an estimated 67,000 die of a drug overdose,” he wrote. “That level of individual despair has occurred in a strong economy with near-record low levels of unemployment in virtually every demographic.” 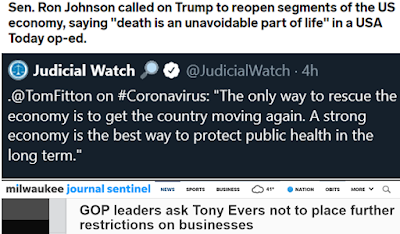 I am not saying “the cure is worse than the disease.” I am saying it is unrealistic to choose between economic devastation on the one hand and millions of deaths on the other. Wisconsinites know that is a false choice. There has to be a middle ground that takes our livelihoods, both physical and economic, into account. - Rep. Mike Gallagher 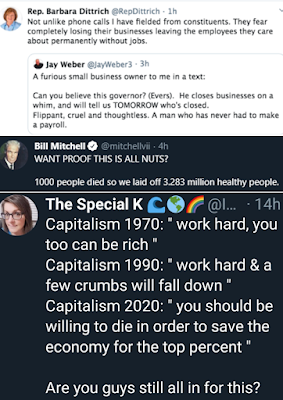 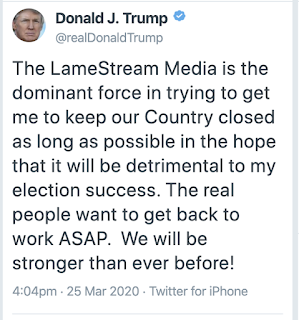 Sacrifice yourself for Capitalism... 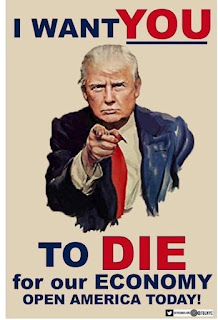 What's Next? Public Health Emergencies Unconstitutional and Threat to Liberty and Freedom: You can be sure this bizarre effort will take off soon, despite seeing both Democratic and Republican governors ordering stay-at-home orders, lockdowns, and nonessential business closings. Will  there be a day when our own government can't help ourselves?

Small government Republicans are arguing that government could order people to stay on their jobs during a pandemic, siding with the whims of big business:


WILL published a legal analysis that argued Evers' emergency powers could face constitutional challenges, particularly if the pandemic persists for a long time. Strong arguments could be made that Evers' actions violate the rights to free speech, due process, peaceably assemble and worship as one chooses, wrote WILL's president, Rick Esenberg. Evers' orders shutting businesses could also be construed as unconstitutionally taking something of value without fair compensation, he argued.