"The system is not really geared to what we need right now, what you are asking for. That is a failing. Let's admit it. The fact is, the way the system was set up, the public health component that Dr. Redfield was talking about, was a system where you put it out there in the public and a physician asks for it and you get it. The idea of anybody getting it easily the way people in other countries are doing it — we're not set up for that. Do I think we should be? Yes. But we're not."

This proves we need universal health care/Medicare4All, like every other country, readily adaptable to coronavirus testing and public access for everyone.

Why has only one person come out with the obvious?:

That brought out the usual right-wing Debbie Downers spewing the usual psychopathic nonsense, that allows for...ready for it, an acceptable amount of deaths, because cars kill people all the time:

A National Health Care System for "the Public Good" Pt.1: We're the only country that doesn't think so. To the monied elite, it's a privilege, as Dumb Ron Johnson recently bragged. Even worse, he coldly asking if food is a right, is shelter a right...not if there's money to be made, right Ron? Yea, he's not too bright either: 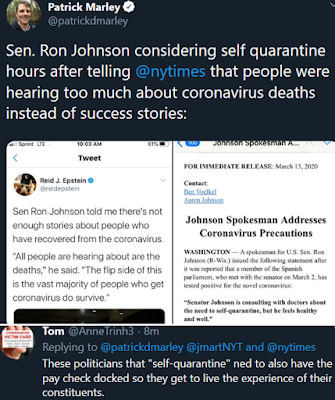 And then this happened to...Scott Walker:

A National Health Care System for "the Public Good" Pt. 2: Why is a national health care system better than our current expensive Rube Goldberg system of mazes, networks, copays, deductibles, preapprovals, exceptions, benefit packages, surprise bills, outrageous drug prices, work requirements...etc. The answer is simple. Sadly, it took a pandemic to get there. From Marketplace.org:

COVID-19 has prompted many experts to point out that health insurance and preventative care are really “public goods,” resources that everyone uses and shares for everyone else’s benefit. “We all have a vested interest in making sure that everybody around us is seeking appropriate medical care at the right time.” - Dan Mendelson, founder of healthcare advisory consultancy Avalere Health.

Do you think the price difference in the story below makes universal health care a better choice?

The US-based twin paid $14,000 for her treatment in addition to the $3,500 premium she paid her insurance company annually, and the UK-based twin paid nothing. Navigating the system was still a maze of negotiating costs and being overbilled. Health experts say this is typical of America's system.

The two sisters wrote a case study of their experience for medical journal BMJ, with the goal of informing people what negotiating with the American healthcare system is like, even what was widely considered to be good insurance. Nancy was a government employee who used private healthcare...some doctors refused to work with her insurance. Some appointments required her to call the billing offices and negotiate.

Nora signed just three pieces of paper to consent to the three surgeries she had: two lumpectomies and a double mastectomy. Nora took six weeks off to have a double mastectomy in 2014, and was encouraged by her boss to take off more time if she needed to.

Nancy says she could only take two weeks off work. The stress of mounting bills and paperwork gave Nancy high blood pressure (which brought more bills and paperwork) Halfway through her radiation treatments, Nancy received a bill for $40,000. It was a billing error, but in the weeks it took the hospital to decipher their mistake, Nancy began to think about mortgaging her home. "How much education you have is irrelevant because the system is just set up to be baffling," said Nancy.

Nora described US healthcare as a grocery store: someone (the insurer) plants themselves in front of the store and declares that nobody can buy food unless they paying them first, with a 100% markup. That store clerk will decide what you can and can't eat, and how much you will pay for it. If you don't like it, you can go to a food bank or starve.

One more reason - Protection from a Moron President. The Trump administration rejected proven test kits from the World Health Organization, which delayed the eventual release of what turned out to be defective US test kits. Trump chose to reinvent the wheel, and for what?: