"Wow!" The beacon of light just went out in America!

When Republicans got away with holding up Obama's supreme court nomination and were rewarded in the elections for doing it, you kinda got a bad feeling about the future. Well, welcome to that future.

I tweeted this: "I'm assuming that quality of life got a whole lot better for Trump Party voters, now what's your excuse?"  Who would have thought the white nationalist Trump travel ban would get a big thumbs up from EVERY conservative justice, rationalizing away and rejecting the religious discrimination claims.

Like many of their other conservative activist decisions, the court selectively rejected the more unlikable fact:

Justice Sonia Sotomayor wrote for the minority, "History will not look kindly on the court's misguided decision today, nor should it ... a reasonable observer would conclude that the Proclamation was motivated by anti-Muslim animus." (The majority arrived at the opposite result by) "ignoring the facts, misconstruing our legal precedent and turning a blind eye to the pain and suffering the Proclamation inflicts upon countless families and individuals, many of whom are United States citizens." Justices Stephen Breyer, Ruth Bader Ginsburg and Elena Kagan also dissented.

This was on top of a major Texas gerrymandering decision, ignored by the media, hinting at how it will eventually decide the Wisconsin case:

The Supreme Court on Monday upheld nearly all aspects of a Texas redistricting plan adopted in 2013, ruling that lower courts went too far in concluding that the maps were tainted by an intent to discriminate against Latino voters. The 5-4 decision split the court along its usual ideological lines. The vote tracked with the justices' decision last September to temporarily block the lower court’s ruling requiring the maps to be withdrawn.

Justice Sotomayer had this dissenting response:

"The Court today goes out of its way to permit the State of Texas to use maps that the three-judge District Court unanimously found were adopted for the purpose of preserving the racial discrimination that tainted its previous maps," she wrote.


Back to today's decision, here's more of Roberts decision exhibiting a big glob of authoritarianism:


Roberts said, "the government has set forth a sufficient national security justification to survive. Because there is persuasive evidence that the entry suspension has a legitimate grounding in national security concerns, quite apart from any religious hostility, we must accept that independent justification." 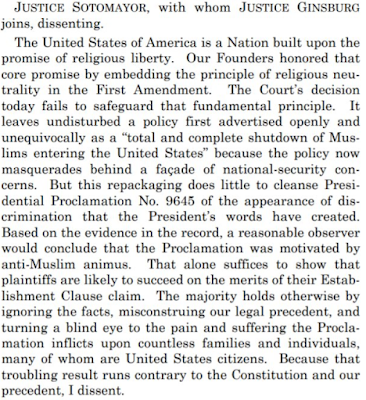 Educators Opposed Trump Policy: The conservative Justices ignore a large body of evidence proving the policies negative consequences on education and innovation. Having seen for myself the large and diverse number of foreign students and teachers at the UW-Madison campus, I will bet this ruling will have a profound negative educational and technological effect on our country. I've talked to a number of students that were sent here by their countries to gain the expertise needed so they could return and improve their own nations economies and quality of life. Forget that now...:


EdWeek: The teachers' unions, higher education groups, and at least 30 colleges and universities had joined friend-of-the-court briefs in support of the challenge to the so-called travel ban.

Justice Breyer, in dissent, noted that there are numerous people who qualify for visa waivers from the affected countries, including students and children. "Unfortunately there is evidence that ... the government is not applying the proclamation as written," Breyer said.

He cited friend-of-the-court briefs filed on the challengers' side by some 30 colleges and universities as well as one by labor groups that was signed by the American Federation of Teachers and the National Education Association.

Sotomayor said the plaintiffs have shown substantial evidence that there will be, among other harms, "constraints to recruiting and retaining students and faculty members to foster diversity and quality within the university community." She cited several of the court's school precedents regarding "a principle at the heart of the establish­ment clause, that government should not prefer one reli­gion to another, or religion to irreligion."