We hear disenfranchised Republican voters say it all the time; they want to be heard and be on the winning side of an improving economy.

But first, we have to destroy the American liberal terrorists.

"Not Backing Down" is GOP Weapon against Liberal Terrorists: Republicans, confronted with publically lying to voters, are now just doubling down, portraying the truth as "politically correct" speech. The horror.

While Vukmir still stubbornly supports torture, learning nothing from history, Haspel said she changed her mind...:


"...With the benefit of hindsight and my experience as a senior agency leader, the enhanced interrogation program is not one the CIA should have undertaken. The United States must be an example to the rest of the world, and I support that."

Not Vukmir, who appears loyal to the Trumpian extremes mirroring Dick Cheney.

Odder still is Vukmir calling out liberal outrage over this and that...you know, stuff like her campaign ad shown below. Yet Vukmir claims that she and Walker's "positive success story" has been the focus...using the same picture? 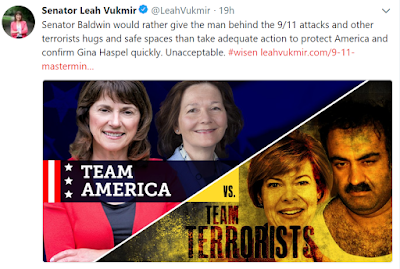 Asked point blank by Mike Gousha if she still stands by calling Baldwin a terrorist, Vukmir said yes via a convoluted word salad. For the record, Baldwin never said anything about Sheikh Mahommed's attacks on Haspel, what Vukmir describes as Baldwin "disappearing:"


Vukmir: “When the 9/11 mastermind — Khalid Sheikh Mohammed attacks Gina Haspel, an eminently qualified woman who would be an excellent and historic choice to lead our CIA, Senator Baldwin is nowhere to be found. If this is what it takes to get people talking about Tammy Baldwin’s liberal record and her tendency to disappear and not represent us then so be it."

Looks like Vukmir is the one who believes Sheikh Mohammed should be taken seriously, not Baldwin. 9/11 is still being exploited by Republicans despite happening under a Republican administration.

Here's what a desperate ideologue looks like under stress, smiling her way through some very ugly territory about the outraged unhinged left...: