WISGOP and their voters insist they are not racist...

...surprise? I'm not seeing a mass exodus of conservatives, angry and resentful that their own Tump Party makes them appear racist. Really, illegal voter drop-ins and wetbacks? Who does that appeal to...let me see now...? 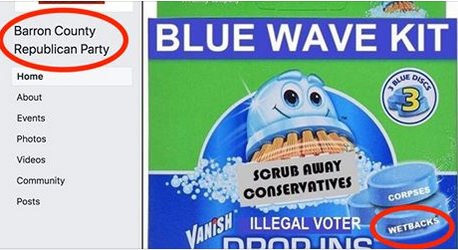 Under the banner “Blue Wave Kit,” it referred to “illegal voter drop-ins” and suggested the recipe for Democratic gains was to “register millions of corpses and illegals to vote Democratic.” Printed on the toilet disc images were the words “corpses” and “wetbacks” ... indicated the “kit” could be used to “scrub away conservatives” and “destroy America one election at a time.”

Caught!!! Of course, the WISGOP likes to pretend Trump Party voters aren't normally doing everything they can to make racism an unconscious and automatic position.

Barron County Republican Party officials apologized Thursday for a post about undocumented immigrants on its official Facebook page that included what is widely considered to be a racist slur. That type of rhetoric does not reflect our views and has no place in our party or our politics.” Barron County GOP co-chairman Bob Newville added, “I’m just sick over this.” “The posted content is highly offensive, unacceptable and has no place in either the Republican Party or Wisconsin politics,” Alec Zimmerman, spokesman for the Republican Party of Wisconsin, said.