It's surreal to see how those feverish right-wing capitalists love it when Trump attacks another successful American business. My guess as to why? Many don't like or just don't want to understand the reality of the global marketplace.

Sadly for us, our insulated from reality career politician Scott Walker has an unwavering focus pushing free-market political theory not found in any other industrialized country in the world. Just as bad, "small government" voters go along with being ignored by their representatives, get nothing in return, and are then asked to suck it up and endure hardship while Trump rolls out thoughtless impulsive trade policies. Like Walker's approval of those damaging tariffs on dairy, soybeans, Harley-Davidson etc. Walker believes "leader" Trump must know what he's doing:


Walker praised Trump's negotiating position during a luncheon with other governors at the White House. "The best thing you said at the G7 is the ultimate goal is let's just get rid of all tariffs," Walker told Trump. "You were brilliant to point that out. That's the ultimate answer."

Of course, it's not going to be Walker struggling to keep the family farm or that steady family sustaining middle-class job.

Never directly addressing the Trump trade war problem for Wisconsin business, predictably, our "unintimidated" governor is now kissing up and praising Trump. It wasn't so long ago...

Piggybacking off that clip from a previous blog post, NPR's Marketplace brought up the Harley workers shocking reaction with this analysis. (NPR audio):


Analyst: "There's this overriding sense among many Trump supporters that I've heard that the president must know what he's doing, and what he's saying has to be right."

Jobs/Taxpayers on Hook for Trump Trade War Problem: Raising Harley's prices and moving jobs overseas is just the beginning. It will get even worse for Wisconsin taxpayers, who might be funding another "carrot" from Rep. Robin Vos:

"I would prefer to use more of a carrot approach to say what can we do to make sure you stay here as opposed to a stick."

Here's a screen-capture of Trump tweets about Harley-Davidson. Insane?: 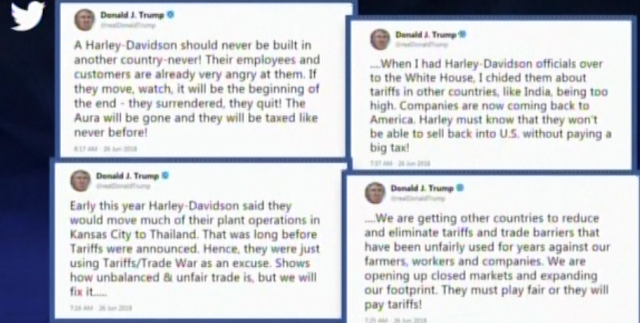