Wisconsin's 42nd Assembly District north of Madison kept that Republican seat, not because candidate Jon Plumer had any real solutions to issues troubling the state, but by spreading fear and acting like Trump. And if you add a little spousal abuse and tough fatherly love into the mix, how could you possibly lose?

Even worse and more embarrassing for Trumpian low-bar Republican voters, they chose as their "lawmaker" a guy investigated for a domestic dispute, disorderly conduct and issued a warrant for not showing up for his court appearance...he didn't think it was mandatory? That's the kind of thinking we need in Madison's Capitol.

But not even these infractions match Plumer's manly Trumpian explanation...where he had to blame someone, like his daughter, instead of just letting go: 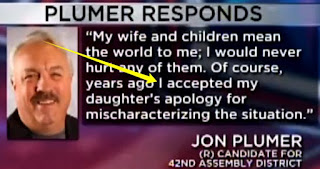 Deeper in the gutter still, was the following ad by the Republican Assembly Campaign Committee, calling Democratic candidate Ann Groves Lloyd a "socialist" who "thinks the United States are terrorists, and that we're like North Korea." Voters, really, that made sense to you?

But I really loved woman 2's response to that comment, when she instantly linked "socialism" and being "like North Korea"...to health care?:

Socialist single-payer health care, you know, like EVERY other rogue industrialize country in the world. NOTE: How do you "kick 200 million Americans off their plans" when single payer covers everyone with health insurance? Those "Rube Goldberg plans" go away forever, and are instead replaced with a system where every doctor is your doctor, and every hospital is your hospital. No bills, no bankruptcies. The horror.

Clean Drinking Water, Health Care BAD: Yup, Ann Groves Lloyd must have scared a lot of people with her ad below trying to protect our drinking water. Somehow, it looked more insane than the Assembly Committees factually incorrect lunacy.

Or Lloyd's hope to provide health care to people with preexisting conditions without going broke. That's crazy, we need a rural Wisconsin version of Trump, and for now, we've got one: