How bad was it? Walker and Schimel's grab at "breathtaking power" stopped by stacked conservative State Supreme Court!!!

State Superintendent and gubernatorial candidate Tony Evers was an election year target of Scott Walker's, and Walker almost got away with it.

The one perfect example of just how extreme our mild-mannered, super relaxed, sleepy-eyed governor Scott Walker really is reads like something out of a third world country.

Seriously, this is what's possible under an arrogant unapologetic one-party Republican regime. Talk about stacking the deck:


JS: Walker had tried to block Evers from picking his own lawyer to defend him in a lawsuit filed by a conservative law firm challenging Evers' authority to write his own education policies. And Republican Attorney General Brad Schimel had assigned Department of Justice lawyers who disagreed with Evers' stance in the case. But the conservative-controlled court said Evers could not be required to be represented by DOJ and that Walker is not a party to the case.

Having loaded the supreme court with conservative activist justices sympathetic to Walker's far right-wing agenda, Walker's chest pounding over partisan wins became almost predictable. Only obvious cases of desperate overreach had any chance of failure, and that finally happened. The court was astonishingly blunt: 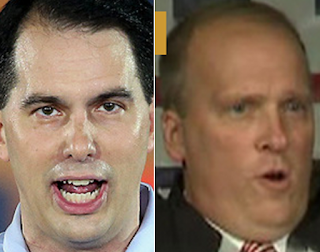 The court said accepting DOJ's argument "would foist upon Evers and DPI an attorney they do not want (and have discharged), taking a position with which they do not agree," prompting ethical implications for DOJ attorneys and give Schimel "breathtaking power."

"It would potentially make the attorney general a gatekeeper for legal positions taken by constitutional officers, such as the governor or justices of this court sued in their official capacity," the court wrote. "DOJ's position would not allow a constitutional officer to take a litigation position contrary to the position of the attorney general. We decline to adopt this view."

Unethical legal conflicts and authoritarian control by the AG is not a problem for the 3 super conservative activists, who don't see minor matters like these as roadblocks, suggesting Evers should just go to majority Republicans in the legislature and get the law changed. Amazing?:

Justices Rebecca Bradley, Michael Gableman and Daniel Kelly disagreed with the court's decision. In their dissent, Bradley said no Wisconsin law gives Evers the power to hire or fire a DOJ attorney.